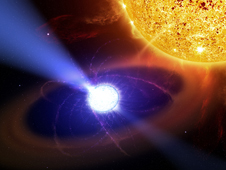 Artist's conception of the white dwarf in the AE Aquarii system. This star is the first of its type known to give off pulsar-like pulsations that are powered by its rotation and particle acceleration. Credit: Casey Reed
> Click for larger image
Astronomers using the Suzaku satellite, a joint Japanese Aerospace Exploration Agency (JAXA) and NASA X-ray observatory, have discovered something strange and unexpected: they found one type of star that’s acting like another.

When a star dies, its core collapses under the pull of gravity to form an exotic type of star. Average-sized stars like our sun leave behind white dwarfs. These stars contain about as much material as the sun, but gravity squeezes them down to the size of Earth. A teaspoon of white dwarf material would weigh about 15 tons!

If that doesn’t impress you, stars much bigger than our sun leave behind neutron stars. These objects contain even more material than the sun, but they are only about 10 miles across -- the size of a city. A teaspoon of neutron star material would weigh 4 billion tons!

Until now, white dwarfs were seen to act in one way, and neutron stars in another. They are two separate classes of objects that share certain characteristics, but differ in many important ways. But a team of astronomers led by Yukikatsu Terada of Saitama University in Japan, has found a white dwarf that is acting like a neutron star.

Many neutron stars send out beams of energy in a manner very similar to a lighthouse. These types of neutron stars are known as pulsars, because of their pulsing behavior. Perhaps the most famous pulsar sits at the center of the Crab Nebula, a giant cloud of gas that is the shattered remnant of a star that astronomers saw explode in the year 1054 A.D. This pulsar is rotating 30 times per second, and as it does so, it radiates beams of radio waves and X-rays.

"We’re seeing behavior like the pulsar in the Crab Nebula, but we’re seeing it in a white dwarf," says Koji Mukai of NASA's Goddard Space Flight Center in Greenbelt, Md., a member of Terada’s team. "This is the first time such pulsar-like behavior has ever been observed in a white dwarf." 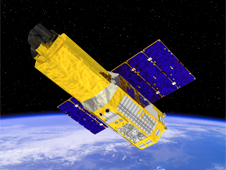 An artist depicts the Suzaku X-ray observatory in Earth orbit. Credit: JAXA
> Click for larger image Terada and his colleagues were not expecting to find a white dwarf mimicking a pulsar. Instead, they were trying to find out if white dwarfs are capable of slingshotting tiny particles to speeds approaching the speed of light (670 million miles per hour).

They targeted a white dwarf known as AE Aquarii in the constellation of Aquarius with Suzaku in October 2005 and October 2006. Suzaku discovered that AE Aquarii is giving off sharp pulses of X-rays. After analyzing the data, the team realized that the hard X-ray pulses occur every 33 seconds, which astronomers had already known is the time it takes the white dwarf to spin once on its axis.

The X-ray pulsations are very similar to those of the pulsar in the center of the Crab Nebula. In both objects, the pulses appear to be radiated like a lighthouse beam, and a rotating magnetic field is thought to be controlling the beam.

AE Aquarii’s magnetic field is so powerful that it can fling particles to nearly the speed of light. Neutron stars are also capable of this feat, so this gives the two types of objects yet another common characteristic. "AE Aquarii seems to be a white dwarf equivalent of a pulsar," says Terada.

Launched in 2005, Suzaku is the fifth in a series of Japanese satellites devoted to studying X-ray sources in space. Managed by JAXA, this mission is a collaborative effort between Japanese universities and institutions and NASA Goddard.