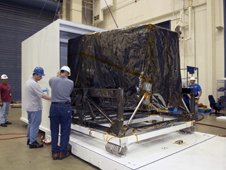 The Integrated Science Instrument Module, or ISIM, is an important component of the Webb telescope. The ISIM includes the structure, four scientific instruments or cameras, electronics, harnesses, and other components.

The ISIM structure is the "backbone" of the ISIM. It is similar to the chassis of a car. Just as a car chassis provides support for the engine and holds other components, the ISIM Structure supports and holds the four Webb telescope science instruments : the Mid-Infrared Instrument (MIRI), the Near-Infrared Camera (NIRCam), the Near-Infrared Spectrograph (NIRSpec) and the Fine Guidance Sensor (FGS). Each of these instruments were created and assembled by different program partners around the world.

When fully assembled, the ISIM will be the size of a small room with the structure acting as a skeleton supporting all of the instruments. Ray Lundquist, ISIM Systems Engineer, at NASA Goddard, commented that "The ISIM structure is truly a one-of-a-kind item. There is no second ISIM being made."

Before arriving at Goddard, the main ISIM structure – a state of the art, cryogenic-compatible, optical structure was designed by a team of engineers at Goddard, and assembled by Alliant Techsystems (ATK) at its Magna, Utah facility. That's the same facility where the Webb Telescope's Backplane is also being assembled. 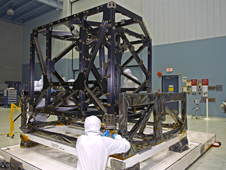 > Larger image
NASA engineers check out the unwrapped ISIM structure in a clean room. The ISIM Structure supports and holds four Webb telescope science instruments.
Credit: NASA, Chris Gunn Now that the structure has arrived at Goddard, it will undergo rigorous qualification testing to demonstrate its ability to survive the launch and extreme cold of space, and to precisely hold the science instruments in the correct position with respect to the telescope. Once the ISIM structure passes its qualification testing, the process of integrating into it all of the other ISIM Subsystems, including the Science Instruments, will begin.

Each of the four instruments that will be housed in the ISIM is critical to the Webb telescope's mission. The MIRI instrument will provide information on the formation and evolution of galaxies, the physical processes of star and planet formation, and the sources of life-supporting elements in other solar systems. The NIRCam will detect the first galaxies to form in the early universe, map the morphology and colors of galaxies; detect distant supernovae; map dark matter and study stellar populations in nearby galaxies. NIRSpec's microshutter cells can be opened or closed to view or block a portion of the sky which allows the instrument to do spectroscopy on many objects simultaneously, measuring the distances to galaxies and determining their chemical content. The FGS is a broadband guide camera used for both "guide star" acquisition and fine pointing. The FGS also includes the scientific capability of taking images at individual wavelengths of infrared light to study chemical elements in stars and galaxies. 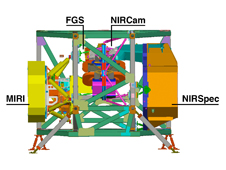 > Larger image
Diagram of the ISIM Structure that supports and holds the four Webb telescope science instruments: the Mid-Infrared Instrument (MIRI), the Near-Infrared Camera (NIRCam), the Near-Infrared Spectrograph (NIRSpec) and the Fine Guidance Sensor (FGS).
Credit: NASA The ISIM itself is very complicated and is broken into three distinct areas:

The first area involves the cryogenic instrument module. This is a critical area, because it keeps the instrument cool. Otherwise, the Webb telescope's heat would interfere with the science instruments’ infrared cameras. So, the module keeps components as cold as -389 degrees Fahrenheit (39 Kelvin). The MIRI instrument is further cooled by a cryocooler refrigerator to -447 degrees Fahrenheit (7 Kelvin).

The second area is the ISIM Electronics Compartment, which provides the mounting surfaces and a thermally-controlled environment for the instrument control electronics.

The third area is the ISIM Command and Data Handling subsystem, which includes ISIM flight Software, and the MIRI cryocooler compressor and control electronics.

NASA Goddard will be assembling and testing the ISIM and its components over the next several years. The integrated ISIM will then be mounted onto the main Webb telescope.

The James Webb Space Telescope is the next-generation premier space observatory, exploring deep space phenomena from distant galaxies to nearby planets and stars. The Webb Telescope will give scientists clues about the formation of the universe and the evolution of our own solar system, from the first light after the Big Bang to the formation of star systems capable of supporting life on planets like Earth. It is expected to launch in 2014. The telescope is a joint project of NASA, the European Space Agency and the Canadian Space Agency.

For more information about each of the instruments on the ISIM, visit:
http://www.jwst.nasa.gov/instruments.html

For more information about the Webb Telescope, visit:
http://www.jwst.nasa.gov/