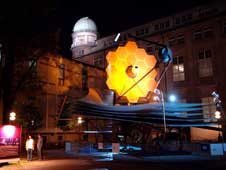 > View larger image
The Webb telescope full scale model lit up at night in Munich, Germany in 2009. Credit: EADS The James Webb Space Telescope has finally made the "big time" at least according to the old Frank Sinatra song "New York, New York." The life-sized model of NASA's next generation space telescope is being set up in New York City's Battery Park for the 2010 World Science Festival, which runs June 1- June 6. The opening ceremony will be held in front of the model on June 1.

As the song goes, "if (the Webb telescope) can make it there, it'll make it anywhere" and scientists are hoping that it will safely arrive in its orbit one million miles from Earth.

"The World Science Festival is a great opportunity for people to get a look at, and learn more about, the future of astronomy from space," said Eric Smith, NASA's Webb Program Scientist. "The Webb telescope full scale model dramatically highlights how far the next generation of space telescopes will be from its predecessors. It’s unlike any telescope you’ve ever seen."

The James Webb Space Telescope is the next-generation premier space observatory, exploring deep space phenomena from distant galaxies to nearby planets and stars. The telescope will give scientists clues about the formation of the universe and the evolution of our own solar system, from the first light after the Big Bang to the formation of star systems capable of supporting life on planets like Earth. 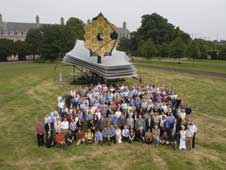 > View larger image
The life-sized James Webb Space Telescope model sits in front of the Royal Hospital Kilmainham, in Dublin, Ireland. Credit: Richard Bent, Northrop Grumman Space Technology. For six days in June, New York City residents can get a free look at the full-scale model of the Webb telescope as it sits on display in Battery Park. The model viewing hours run from Tuesday, June 1 from 9:00 a.m. to Sunday, June 6 at 9:00 p.m. EDT. The actual size model is highly detailed. It is constructed mainly of aluminum and steel, weighs 12,000 pounds, is approximately 80 feet long, 40 feet wide and 40 feet tall. It is as large as a tennis court. The model requires 2 trucks to ship it and assembly takes a crew of 12 approximately four days. The model will be lit up from its base so that night-time viewers can take in all the details.

The full-scale model of the James Webb Space Telescope was built by the prime contractor, Northrop Grumman, to provide a better understanding of the size, scale and complexity of this satellite.

On Friday June 4, from 8-9:30 p.m. EDT, there will be a special event at the base of the full-sized model, called "From the City to the Stars," where scientists will talk about the possible discoveries that the Webb telescope could make.

The event is also free and open to the public. Dr. John Mather, Nobel laureate and the Webb telescope’s senior project scientist; Dr. John Grunsfeld, astronaut, physicist and "chief repairman" of the Hubble Telescope and planetary astronomer Dr. Heidi Hammel will be at the event to talk about the discoveries anticipated from the Webb telescope. NASA Deputy Administrator Lori Garver will be a featured speaker at the Festival kick-off. She will share with the New York audience NASA’s strong commitment to continued scientific discovery, with missions like the Webb telescope, and talk about some of the other exciting endeavors on NASA’s new path forward.

Since 2005, the model has journeyed to Florida, Germany, Ireland and Washington, D.C. The actual Webb space telescope is going a lot further, about a million miles from Earth!