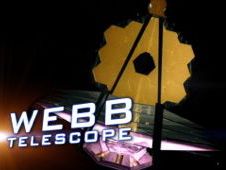 › View streaming video
› Download video (59 MB m4v)
› Other formats at svs.gsfc.nasa.gov
The 1.7-minute Webb movie trailer is available in many formats. Credit: NASA/Goddard/Mike McClare Picture yourself in a movie theater waiting for the main attraction to begin and the scent of popcorn wafts through the air. The screen lights up with coming attractions and you see a "movie trailer" that you think is really cool. That's what the latest promotional video for NASA's James Webb Space Telescope is like, but instead of a coming Hollywood blockbuster, it is about the future of space astronomy.

This new 90 second video produced at NASA hurls the viewer through space and asks if you can imagine seeing 13 billion years back in time, see the first stars, galaxies evolve and solar systems form. That's what the Webb telescope is going to show us after it launches in four years.

The movie trailer also shows some of the technological highlights included in the Webb space telescope, and creates excitement for the mission.

The James Webb Space Telescope is the next-generation premier space observatory, exploring deep space phenomena from distant galaxies to nearby planets and stars. The telescope will give scientists clues about the formation of the universe and the evolution of our own solar system, from the first light after the Big Bang to the formation of star systems capable of supporting life on planets like Earth.

The video was created by Michael McClare, Senior Producer in the multi-media group at NASA's Goddard Space Flight Center, Greenbelt, Md. McClare said,"It struck me that the perfect way to highlight the Webb Telescope’s mission is with a movie trailer-like production. The challenge is creating something that grabs the viewer right away. Then, in the next 90-seconds explain the mission's science goals, tease its revolutionary technology and hopefully, elicit interjections like, 'Cool!' and 'Wow!' for this incredible endeavor. It’s only the first of series of media features planned. I’m excited to be part of this extraordinary mission and some of that excitement found its way into the movie trailer."

It took a super-computer to create the science parts of the movie trailer and a collaborative "movie-making" effort. Those visuals were based on theoretical super-computer models and NASA worked with the National Center for Supercomputing Applications to create them.

People do not need to run to the theater to see the movie trailer they just need to get on the Internet. The video is available in various formats, High Resolution DVCPro HD, High Resolution Photo JPG, QuickTime format (720 H.264), MPEG-4 (1280x720 29.97) and h264. Mov format. All of these will be available at NASA's Scientific Visualization Studio Web site: http://svs.gsfc.nasa.gov/, or at the James Webb Space Telescope mission Web Site: http://www.jwst.nasa.gov.

This "movie trailer" has a lot of production behind it, in terms of designing and building the telescope. In fact, this effort is multinational because the Webb telescope is a joint project of NASA, the European Space Agency and the Canadian Space Agency.

The movie trailer had its debut at the American Astronautical Society's Robert H. Goddard Memorial Symposium, in Greenbelt on March 11 and will air for all time on the Internet for all to enjoy. The Webb telescope's "major motion picture" begins when it launches in 2014!

The movie trailer is available in various formats at:
› svs.gsfc.nasa.gov/goto?10565