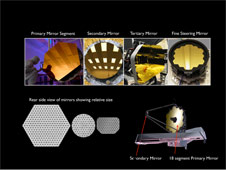 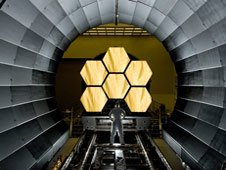 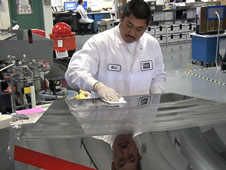 › View larger image
Click here for the episode of 'Behind the Webb' called "Wax On, Wax Off" that focuses on some of the processes that go into making the mirrors on the Webb telescope so powerful. Credit: STScI/Mary Estacion Mirrors are a critical part of a telescope. The quality is crucial, so completion of mirror polishing represents a major milestone. All of the mirrors that will fly aboard NASA's James Webb Space Telescope have been polished so the observatory can see objects as far away as the first galaxies in the universe.

The Webb telescope is comprised of four types of mirrors. The primary one has an area of approximately 25 square meters (29.9 square yards), which will enable scientists to capture light from faint, distant objects in the universe faster than any previous space observatory. The mirrors are made of Beryllium and will work together to relay images of the sky to the telescope's science cameras.

"Webb's mirror polishing always was considered the most challenging and important technological milestone in the manufacture of the telescope, so this is a hugely significant accomplishment," said Lee Feinberg, Webb Optical Telescope manager at NASA's Goddard Space Flight Center in Greenbelt, Md.

The mirrors were polished at the L3 Integrated Optical Systems - Tinsley in Richmond, Calif. to accuracies of less than one millionth of an inch. That accuracy is important for forming the sharpest images when the mirrors cool to -400°F (-240°C) in the cold of space.

"The completion of the mirror polishing shows that the strategy of doing the hardest things first has really paid off," said Nobel Prize Winner John C. Mather, Webb’s senior project scientist at Goddard. "Some astronomers doubted we could make these mirrors."

After polishing, the mirrors are being coated with a microscopically thin layer of gold to enable them to efficiently reflect infrared light. NASA has completed coating 13 of 18 primary mirror segments and will complete the rest by early next year. The 18 segments fit together to make one large mirror 21.3 feet (6.5 meters) across.

"This milestone is the culmination of a decade-long process," said Scott Willoughby, vice president and Webb Telescope Program manager for Northrop Grumman Aerospace Systems. "We had to invent an entire new mirror technology to give Webb the ability to see back in time."

As the successor to the Hubble Space Telescope, the Webb telescope is the world's next-generation space observatory. It is the most powerful space telescope ever built. More than 75 percent of its hardware is either in production or undergoing testing. The telescope will observe the most distant objects in the universe, provide images of the first galaxies ever formed and study planets around distant stars. NASA, the European Space Agency and the Canadian Space Agency are collaborating on this project.