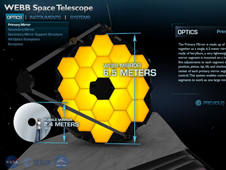 Follow the link below to see the James Webb Space Telescope in all it's glory, including close-ups of its internal workings and instruments. Credit: NASA/Goddard Space Flight Center
› Go to the interactive Imagine flying around in space to examine a future space observatory that’s under construction today. Thanks to animators and web developers, Internet users can get a fly-by tour of NASA's next-generation, tennis court-sized James Webb Space Telescope on their computer.

This new interactive utilizes cutting-edge Flash and 3-D interactivity through an engine for Flash called Away 3D. Models of this complexity are rarely truly interactive, and this one comes at the start of a trend that will bring true 3D interactivity to the web via Flash.

"We wanted to make the 3-D Webb feature fun and inviting," said Michael McClare, Senior Media Producer for the Webb telescope project for Honeywell at NASA's Goddard Space Flight Center in Greenbelt, Md. He said that users do not need to download anything to make the interactive fly-by tour work.

The interactive fly-by tour was created to allow people to get familiar with the Hubble Space Telescope’s successor. For years NASA and contractors have been brainstorming, designing, building, and testing various components of the telescope—infrared cameras, a massive multi-layer sunshield, 18 mirror segments—that will allow the Webb to peer deeper than ever into the cosmos.

The interactive Fly-by tour can be found on-line at www.nasa.gov/externalflash/webb3d

Users have complete control of the spacecraft. This differs from other 3-D interactives that use movies to mimic 3-D control—here you have true 360 degree interaction.

This interactive Fly-by tour allows smooth movements of the Webb telescope—users can make the spacecraft spin gently with just a nudge. The interactive actually allows for views of the telescope from any angle. Popup description boxes add a discovery/learning element to the feature, and in the large black box behind the Primary Mirror, users will be able to peer inside the telescope to see the actual location of instruments within the Integrated Science Instrument Module (ISIM) Structure.

After a brief opening sequence offering images of the space telescope intercut with Webb's science objective simulations, the Webb telescope appears in 3-D and a menu appears under the heading. Users can manipulate the telescope at will or can use the menu for a more guided tour of Webb's major components with choices to view Optics, Instruments or (Support) Systems.

The James Webb Space Telescope is NASA's next-generation space observatory and successor to the Hubble Space Telescope. The most powerful space telescope ever built, Webb will observe the most distant objects in the universe, provide images of the very first galaxies ever formed, provide insight to how solar systems evolve and help explore planets around distant stars. The Webb telescope is a joint project of NASA, the European Space Agency, and the Canadian Space Agency.

So next time you want to explore something huge and amazing, seeing it as if it were right in front of you, go on-line and take the fly-by tour around the James Webb Space Telescope.