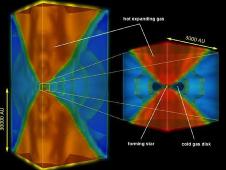 Scientists are simulating how the very first stars in our universe were born. Image credit: NASA/JPL-Caltech/Kyoto Univ.
› Full image and caption

PASADENA, Calif. -- The very first stars in our universe were not the behemoths scientists had once thought, according to new simulations performed at NASA's Jet Propulsion Laboratory, Pasadena, Calif.

Astronomers "grew" stars in their computers, mimicking the conditions of our primordial universe. The simulations took weeks. When the scientists' concoctions were finally done, they were shocked by the results -- the full-grown stars were much smaller than expected.

Until now, it was widely believed that the first stars were the biggest of all, with masses hundreds of times that of our sun. The new research shows they are only tens of times the mass of sun; for example, the simulations produced one star that was as little as 43 solar masses.

"The first stars were definitely massive, but not to the extreme we thought before," said Takashi Hosokawa, an astronomer at JPL and lead author of the new study, appearing online Friday, Nov. 11 in the journal Science. "Our simulations reveal that the growth of these stars is stunted earlier than expected, resulting in smaller final sizes."

The early universe consisted of nothing more than thin clouds of hydrogen and helium atoms. A few hundred million years after its birth, the first stars began to ignite. How these first stars formed is still a mystery.

Astronomers know that all stars form out of collapsing clouds of gas. Gravity from a growing "seed" at the center of the cloud attracts more and more matter. For so-called normal stars like our sun, this process is aided by heavier elements such as carbon, which help to keep the gas falling onto the budding star cool enough to collapse. If the cloud gets too hot, the gas expands and escapes.

But, in the early universe, stars hadn't yet produced heavy elements. The very first stars had to form out of nothing but hydrogen and helium. Scientists had theorized that such stars would require even more mass to form, to compensate for the lack of heavy elements and their cooling power. At first, it was thought the stars might be as big as one thousand times the mass of our sun. Later, the models were refined and the first stars were estimated to be hundreds of solar masses.

"These stars keep getting smaller and smaller over time," said Takashi. "Now we think they are even less massive, only tens of solar masses."

The team's simulations reveal that matter in the vicinity of the forming stars heats up to higher temperatures than previously believed, as high as 50,000 Kelvin (90,000 degrees Fahrenheit), or 8.5 times the surface temperature of the sun. Gas this hot expands and escapes the gravity of the developing star, instead of falling back down onto it. This means the stars stop growing earlier than predicted, reaching smaller final sizes.

"This is definitely going to surprise some folks," said Harold Yorke, an astronomer at JPL and co-author of the study. "It was standard knowledge until now that the first stars had to be extremely massive."

The results also answer an enigma regarding the first stellar explosions, called supernovae. When massive stars blow up at the end of their lives, they spew ashes made of heavier elements into space. If the very first stars were the monsters once thought, they should have left a specific pattern of these elements imprinted on the material of the following generation of stars. But, as much as astronomers searched the oldest stars for this signature, they couldn't find it. The answer, it seems, is that it simply is not there. Because the first stars weren't as massive as previously thought, they would have blown up in a manner akin to the types of stellar explosions that we see today.

"I am sure there are more surprises in store for us regarding this exciting period of the universe," said Yorke. "NASA's upcoming James Webb Space Telescope will be a valuable tool to observe this epoch of early star and galaxy formation."

The California Institute of Technology manages JPL for NASA. More information about JPL is online at http://www.jpl.nasa.gov .