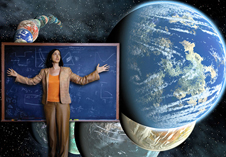 
It's fitting that Sara Seager is fascinated by stories of explorers visiting uncharted places. From her groundbreaking work on the detection of exoplanet atmospheres to her innovative theories about life on other worlds, Seager has been a pioneer in the vast and unknown world of exoplanets.

Now, like an astronomical Indiana Jones, she's on a quest after the field's holy grail - another Earth-like planet.

In addition to her role as a professor of planetary science and physics at MIT, Seager is also a part of numerous planet hunting committees and projects. She's served on NASA's Exoplanet Task Force and on the Terrestrial Planet Finder science teams. She is currently a participating scientist on the Kepler planet-hunting mission, a co-investigator on the planet-studying EPOXI mission, and is the science team lead on the eXtrasolar Planet Characterizer (XPC) concept study.

PlanetQuest caught up with Seager recently to find out what life is like on astronomy's cutting edge.

PlanetQuest: Do you think that an Earth-like planet will be discovered in your lifetime?

Sara Seager: I like to live in the future, and I'm getting older, so I'm determined to find another Earth-like planet in my lifetime. The super-Earths are interesting, but the difference between them and a real Earth is like the difference between finding your long-lost twin and finding a very, very distant cousin that you have nothing in common with. So I'm working on a concept study for a mission that will look at the very brightest stars in the sky, because those are the only ones that are bright enough for follow-up observations to detect the atmosphere of an Earth-like planet.

Seager is one of the scientists involved with the Kepler planet-hunting mission, scheduled to be launched in 2009.

My idea involves small telescopes in space, each looking at a bright star for signs of a Earth-like planet going in front of the star as seen from Earth, which is called "transiting". I'm convinced that it's going to be successful and that we'll be able to complete the Copernican Revolution.

PQ: You're well-known in scientific circles these days, but how did you get your start in exoplanets?

Seager: Well, I was looking for something different to do for my PhD thesis back in 1996, so I decided to write about the properties of hot exoplanet atmospheres - this was one year after the first exoplanets around sun-like stars were discovered in 1995, and no one else had written about this topic. Later, I was the first to propose the detection of exoplanet atmospheres by observing as they transited their host stars. The methods I proposed back then are being used on missions like the Spitzer Space Telescope and the Hubble Space Telescope to detect the composition of exoplanet atmospheres - and they're finding the atoms and molecules that I predicted would be there.

PQ: That's an amazing achievement. What does your work involve these days?

Seager: I'm currently a professor of planetary science and physics at MIT - I create models of planet interiors and atmospheres to understand observations of exoplanets. I also study what atmospheres might look like on "Earth cousins" - planets like ours that could have all different kinds of atmospheres, where life could have adapted differently to the conditions on that planet. I'm also working on how we can apply the methods we use to look at the atmospheres of giant planets to smaller, "super-Earth" size planets using the future James Webb Space Telescope.

Seager: For me, the hook is the idea of an Earth-like planet, knowing that there's an Earth analog out there. The Kepler mission will be able to tell us if planets like our own orbiting other stars are common, something that will really change the way we look at things. I like to think of finding a true Earth analog as the completion of the Copernican Revolution - Copernicus started a new paradigm when he said that the Earth was not the center of the universe. If we can identify another Earth-like planet, it comes full circle, from thinking that everything revolves around our planet to knowing that there are lots of other Earths out there. 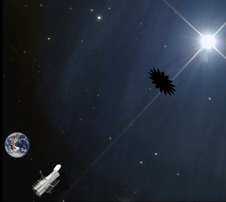 PQ: What's been the most surprising thing you've learned during the course of your career?

Seager: I can think of two surprises: one, any kind of planet is out there, at every semi-major axis. The process of planet formation is random and we've seen planet masses and orbits we never thought could exist. And the second surprise is about the physical characteristics of some planets. For example, how did the "hot Jupiters" get so huge and close to their host stars? Some are bigger than we thought planets could be, too big for us to understand why right now.

PQ: What Earth-bound hobbies do you pursue when you aren't planet hunting?

Seager: Well, I have two little kids, so I don't have that much spare time anymore, but I really like canoeing in the Arctic; the northern environment really forces you to push yourself. I like to read, too, books and magazines. My favorite book is "Sleeping Island: The Story of One Man's Travels in the Great Barren Lands of the Canadian North." (book titles in quotes, per AP style) It's about a Midwest schoolteacher around the 1930s who, every summer, went canoeing in parts of northern Canada that hadn't been mapped yet, just exploring and meeting natives. I like the idea of modern-day-explorers, that sense of adventure about the unknown.

To learn more about the hunt for another Earthlike planet and other exoplanet news, visit PlanetQuest at http://planetquest.jpl.nasa.gov.

Written By Joshua Rodriguez/PlanetQuest
› Back To Top