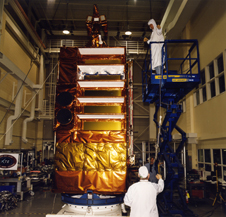 RXTE far exceeded its original science goals and leaves astronomers with a scientific bounty for years to come. Data from the mission have resulted in more than 2,200 papers in refereed journals, 92 doctoral theses, and more than 1,000 rapid notifications alerting astronomers around the globe to new astronomical activity.

"The spacecraft and its instruments had been showing their age, and in the end RXTE had accomplished everything we put it up there to do, and much more," said Tod Strohmayer, RXTE project scientist at Goddard.

The decision to decommission RXTE followed the recommendations of a 2010 review board tasked to evaluate and rank each of NASA's operating astrophysics missions.

"After two days we listened to verify that none of the systems we turned off had autonomously re-activated, and we've heard nothing," said Deborah Knapp, RXTE mission director at Goddard.

The 7,000-pound satellite is expected to re-enter the atmosphere between 2014 and 2023, depending in large part on solar activity.

To celebrate the spacecraft's long and productive career, astronomers will hold a special session on RXTE during the 219th meeting of the American Astronomical Society (AAS) in Austin, Texas. The session is scheduled for Tuesday, Jan. 10, at 3 p.m. CST. A press conference on new RXTE results will also be held at the meeting on Jan. 10 at 1:45 p.m. EST.

RXTE opened a new window into the workings of neutron stars and black holes. Using its data, astronomers established the existence of highly magnetized neutron stars (known as magnetars) and discovered the first accreting millisecond pulsars, a previously unseen stage in the formation of "recycled" millisecond radio pulsars that were first glimpsed in the early 1980s. The observatory also provided the first observational evidence of "frame-dragging" in the vicinity of a black hole, an effect predicted by Einstein's general theory of relativity.

RXTE carried three instruments, the Proportional Counter Array (PCA) and the High Energy X-ray Timing Experiment (HEXTE), which could be directed to specific targets. The PCA was developed by Goddard to cover the lower part of the energy range. HEXTE was built by the University of California at San Diego for exploring the upper energy range.

The observatory's instruments measured variations in X-ray emission on timescales as short as microseconds and as long as months across a wide energy span, from 2,000 to 250,000 electron volts. For comparison, the energy of a typical dental X-ray is around 60,000 electron volts.

A third instrument, called the All-Sky Monitor, was developed by the Massachusetts Institute of Technology (MIT) in Cambridge. It scanned about 80 percent of the sky every orbit, giving astronomers the ability to monitor the variable and often unpredictable X-ray sky and to record long-term histories of bright sources.

The astronomical community has recognized the importance of RXTE research with five major awards. These include four Rossi Prizes (1999, 2003, 2006 and 2009) from the High Energy Astrophysics Division of the AAS and the 2004 NWO Spinoza prize, the highest Dutch science award, from the Netherlands Organization for Scientific Research.

The mission was launched as XTE aboard a Delta II 7920 rocket on Dec. 30, 1995, from Cape Canaveral Air Force Station in Florida. It was renamed RXTE in early 1996 in honor of Bruno Rossi, an MIT astronomer and a pioneer of X-ray astronomy and space plasma physics who died in 1993. RXTE was managed by Goddard. Francis Reddy
NASA's Goddard Space Flight Center, Greenbelt, Md.