Left: The giant elliptical galaxy NGC 5128 is the radio source known as Centaurus A. Vast radio-emitting lobes (shown as orange in this optical/radio composite) extend nearly a million light-years from the galaxy. Credit: Capella Observatory (optical), with radio data from Ilana Feain, Tim Cornwell, and Ron Ekers (CSIRO/ATNF), R. Morganti (ASTRON), and N. Junkes (MPIfR). Right: The radio image from the TANAMI project provides the sharpest-ever view of a supermassive black hole's jets. This view reveals the inner 4.16 light-years of the jet and counterjet, a span less than the distance between our sun and the nearest star. The image resolves details as small as 15 light-days across. Undetected between the jets is the galaxy's 55-million-solar-mass black hole. Credit: NASA/TANAMI/Müller et al.
› Larger image
› Larger image without labels 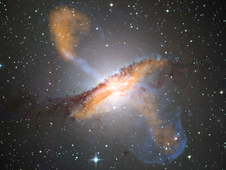 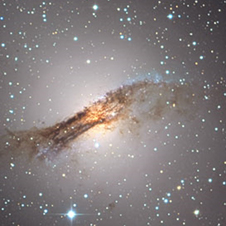 The elliptical galaxy NGC 5128, host of the Centaurus A radio source, as it appears in visible light. The galaxy is located about 12 million light-years away and is one of the closest that sports an active supermassive black hole. Credit: Capella Observatory
› Larger image 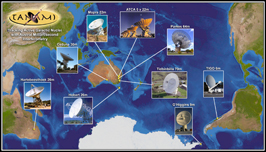 The TANAMI array consists of nine radio telescopes located on four continents. By combining data from the individual telescopes, astronomers can acquire images with the sharpness of a single telescope some 6,200 miles (10,000 km) across -- about 80 percent of Earth's diameter. Credit: Matthias Kadler (Univ. of Würzburg) and J. Wilms (Univ. of Erlangen-Nuremberg)
› Larger image An international team, including NASA-funded researchers, using radio telescopes located throughout the Southern Hemisphere has produced the most detailed image of particle jets erupting from a supermassive black hole in a nearby galaxy.

"These jets arise as infalling matter approaches the black hole, but we don't yet know the details of how they form and maintain themselves," said Cornelia Mueller, the study's lead author and a doctoral student at the University of Erlangen-Nuremberg in Germany.

The new image shows a region less than 4.2 light-years across -- less than the distance between our sun and the nearest star. Radio-emitting features as small as 15 light-days can be seen, making this the highest-resolution view of galactic jets ever made. The study will appear in the June issue of Astronomy and Astrophysics and is available online.

Mueller and her team targeted Centaurus A (Cen A), a nearby galaxy with a supermassive black hole weighing 55 million times the sun's mass. Also known as NGC 5128, Cen A is located about 12 million light-years away in the constellation Centaurus and is one of the first celestial radio sources identified with a galaxy.

Seen in radio waves, Cen A is one of the biggest and brightest objects in the sky, nearly 20 times the apparent size of a full moon. This is because the visible galaxy lies nestled between a pair of giant radio-emitting lobes, each nearly a million light-years long.

These lobes are filled with matter streaming from particle jets near the galaxy's central black hole. Astronomers estimate that matter near the base of these jets races outward at about one-third the speed of light.

"Advanced computer techniques allow us to combine data from the individual telescopes to yield images with the sharpness of a single giant telescope, one nearly as large as Earth itself," said Roopesh Ojha at NASA's Goddard Space Flight Center in Greenbelt, Md.

The enormous energy output of galaxies like Cen A comes from gas falling toward a black hole weighing millions of times the sun's mass. Through processes not fully understood, some of this infalling matter is ejected in opposing jets at a substantial fraction of the speed of light. Detailed views of the jet's structure will help astronomers determine how they form.

The jets strongly interact with surrounding gas, at times possibly changing a galaxy's rate of star formation. Jets play an important but poorly understood role in the formation and evolution of galaxies.

NASA's Fermi Gamma-ray Space Telescope has detected much higher-energy radiation from Cen A's central region. "This radiation is billions of times more energetic than the radio waves we detect, and exactly where it originates remains a mystery," said Matthias Kadler at the University of Wuerzburg in Germany and a collaborator of Ojha. "With TANAMI, we hope to probe the galaxy's innermost depths to find out."

Ojha is funded through a Fermi investigation on multiwavelength studies of Active Galactic Nuclei.

The astronomers credit continuing improvements in the Australian Long Baseline Array (LBA) with TANAMI's enormously increased image quality and resolution. The project augments the LBA with telescopes in South Africa, Chile and Antarctica to explore the brightest galactic jets in the southern sky.

NASA’s Fermi Gamma-ray Space Telescope is an astrophysics and particle physics partnership, developed in collaboration with the U.S. Department of Energy, along with important contributions from academic institutions and partners in France, Germany, Italy, Japan, Sweden and the U.S. The Australia Long Baseline Array is part of the Australia Telescope National Facility, which is funded by the Commonwealth of Australia for operation as a National Facility managed by the Commonwealth Scientific and Industrial Research Organization.

Find this article at: http://www.nasa.gov/topics/universe/features/radio-particle-jets.html