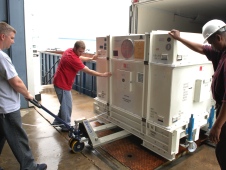 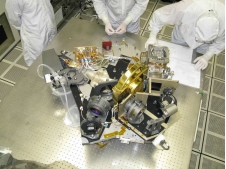 The NIRCam has passed its testing at Lockheed and is being readied for shipment to Goddard. Credit: Lockheed Martin
› Larger image A test unit for the Near Infrared Camera (NIRCam) instrument that will fly aboard the James Webb Space Telescope has arrived at NASA's Goddard Space Flight Center in Greenbelt, Md. and has been placed in a clean room for a year's worth of tests.

The NIRCam will be the primary imager on the Webb telescope and will measure light in the spectrum in the wavelength range of 0.6 to 5 microns. The unit that arrived at Goddard is actually an engineering test unit, and not the actual instrument that will fly aboard the Webb telescope.


The actual NIRCam is being built by a team at University of Arizona and Lockheed Martin’s Advanced Technology Center, Palo Alto, Calif. and led by Prof. Marcia Rieke at Arizona. Lockheed Martin built the NIRCam engineering test unit (ETU) - a replica of the flight unit that can perform certain flight functions for testing purposes.

At NASA Goddard, the NIRCam will undergo one year's worth of testing to verify instrument interfaces and integration and test processes. The ETU will be used to practice installation into the Integrated Science Instrument Module (ISIM) structure. The ISIM is the heart of the Webb telescope, the unit that will house the four main Webb instruments. Measurements will also be made of the precise location of the NIRCam instrument within ISIM to later aid in alignment of the flight model. The NIRCam is a science instrument but also an Optical Telescope Element wavefront sensor, which provides something similar to instant LASIK vision correction.

"The NIRCam ETU includes one fully functional optical channel and was used to demonstrate the hardware to be used in aligning the Webb telescope's mirror segments," said Rieke, the principal investigator for the NIRCam.

The James Webb Space Telescope will detect the first light emitting galaxies and star clusters to form in the Universe after the Big Bang. The NIRCam design is optimized for finding these "First Light" sources. The camera also includes features that will make it a wonderful tool for studying star formation in the Milky Way Galaxy and for discovering and characterizing planets around other stars.

Diane Yun NIRCam Instrument Manager at NASA Goddard,"A lot of hard work went into developing and testing the NIRCam ETU. We are excited to have it here at Goddard for ISIM testing. This brings us one step closer to achieving the science goals of NIRCam and the Webb telescope."

The actual NIRCam flight instrument is scheduled to arrive at NASA Goddard in 2011 for testing and incorporation into the Webb telescope.