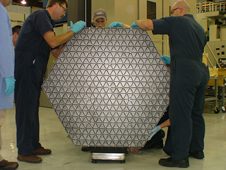 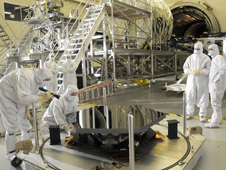 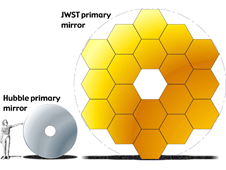 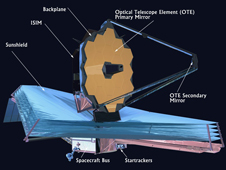 The first of 18 mirror segments that will fly on NASA's James Webb Space Telescope arrived this week at the Marshall Space Flight Center, Huntsville, Ala. to prepare it to meet the extreme temperatures it will encounter in space.

The X-ray & Cryogenic Facility (XRCF) at the Marshall Center is the world’s largest X-ray telescope test facility and a unique, cryogenic, clean room optical test facility. Cryogenic testing will take place in a 7,600 cubic foot helium cooled vacuum chamber, chilling the Webb flight mirror from room temperature down to frigid -414 degrees Fahrenheit. While the mirrors change temperature, test engineers will precisely measure their structural stability to ensure they will perform as designed once they are operating in the extreme temperatures of space.

"Getting the best performance requires conditioning and testing the mirrors in the XRCF at temperatures just as cold as in space," said Helen Cole, project manager for Webb Telescope mirror activities at XRCF. "Optical measurements of the 18 mirror segments at cold temperatures will be made and used to create mirrors that will focus crisply in space. This will allow us to see new wonders in our Universe."

NASA's James Webb Space Telescope is a large, infrared-optimized space telescope that will be the premier observatory of the next decade. It will study every phase in the history of our Universe, ranging from the first luminous glows after the Big Bang, to the formation of solar systems capable of supporting life on planets like Earth, to the evolution of our own Solar System. Its instruments will be designed to work primarily in the infrared range of the electromagnetic spectrum, with some capability in the visible range.

The Webb Telescope will have a large mirror, 6.5 meters (21.3 feet) in diameter, made up of 18 segments about 1.5 meters (4.9 feet) in size. The telescope’s home in space will be about one million miles from Earth. The completed primary mirror will be over 2.5 times larger than the diameter of the Hubble Space Telescope's primary mirror, which is 2.4 meters (7.8 feet) in diameter, but will weigh roughly half as much because it is made of beryllium, one of the lightest applicable metals known to man.

The amount of detail a space telescope can see is directly related to the size of the mirror area that collects light from the universe. A larger area collects more light and can see deeper into space and at a much higher resolution than a smaller mirror. That's why the telescope's primary mirror is made up of 18 mirror segments that form a total area of 25 square-meters (almost 30 square yards) when they all come together.

What's unique about the large primary mirror is that each of the 18 mirrors will have the ability to be moved individually, so that they can be aligned together to act as a single large mirror. Scientists and engineers can also correct for imperfections after the telescope opens in space, or if any changes occur in the mirror during the life of the mission. Precision testing, like this test cycle in the X-ray & Cryogenic Facility, provides detailed measurements to fabricate and deliver a high resolution mirror.

"Beginning today, we kick off exclusive testing of the James Webb Space Telescope mirrors which will run though 2011. Our one-of-a-kind facility can provide the environment which allows us to optically measure infinitesimally small changes in the mirrors as they cool," said Jeff Kegley, XRCF testing manager.

The James Webb Space Telescope is expected to launch in 2013. NASA's Goddard Space Flight Center in Greenbelt, Md. is managing the overall development effort for the Webb telescope. The telescope is a joint project of NASA and many U.S. partners, the European Space Agency and the Canadian Space Agency.

For related images to this story, please visit: