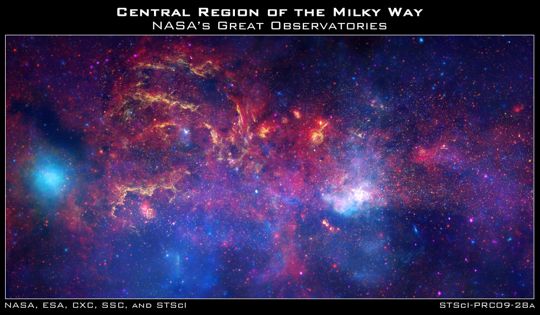 In this spectacular image, observations using infrared light and X-ray light see through the obscuring dust and reveal the intense activity near the galactic core. Note that the center of the galaxy is located within the bright white region to the right of and just below the middle of the image. The entire image width covers about one-half a degree, about the same angular width as the full moon. Credit: NASA, ESA, SSC, CXC, and STScI
› Larger image

A never-before-seen view of the turbulent heart of our Milky Way galaxy is being unveiled by NASA on Nov. 10. This event will commemorate the 400 years since Galileo first turned his telescope to the heavens in 1609.

In celebration of this International Year of Astronomy, NASA is releasing images of the galactic center region as seen by its Great Observatories to more than 150 planetariums, museums, nature centers, libraries and schools across the country.

The sites will unveil a giant, 6-foot-by-3-foot print of the bustling hub of our galaxy that combines a near-infrared view from the Hubble Space Telescope, an infrared view from the Spitzer Space Telescope and an X-ray view from the Chandra X-ray Observatory into one multi-wavelength picture. Experts from all three observatories carefully assembled the final image from large mosaic photo surveys taken by each telescope. This composite image provides one of the most detailed views ever of our galaxy's mysterious core.

Participating institutions also will display a matched trio of Hubble, Spitzer and Chandra images of the Milky Way's center on a second large panel measuring 3 feet by 4 feet. Each image shows the telescope's different wavelength view of the galactic center region, illustrating not only the unique science each observatory conducts, but also how far astronomy has come since Galileo. 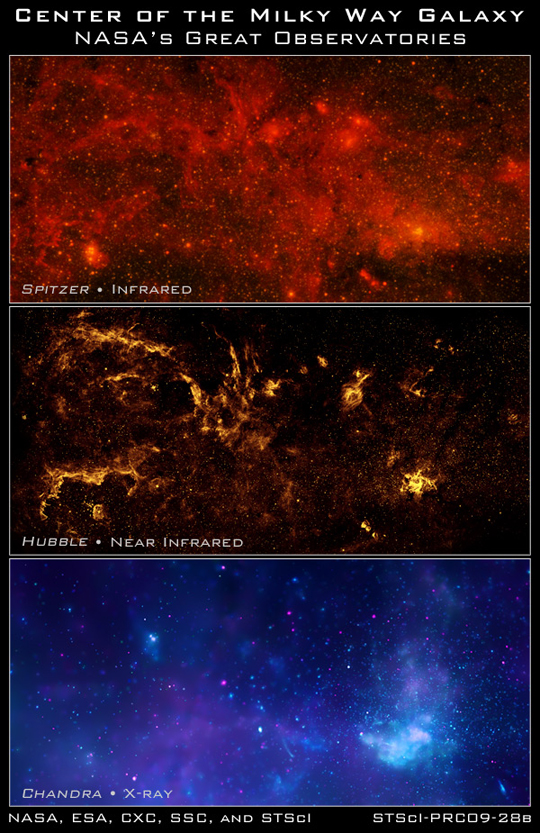 Each telescope's contribution is presented in a different color:
Yellow represents the near-infrared observations of Hubble. They outline the energetic regions where stars are being born as well as reveal hundreds of thousands of stars.

Blue and violet represent the X-ray observations of Chandra. X-rays are emitted by gas heated to millions of degrees by stellar explosions and by outflows from the supermassive black hole in the galaxy's center. The bright blue blob on the left side is emission from a double star system containing either a neutron star or a black hole.

The composite image features the spectacle of stellar evolution: from vibrant regions of star birth, to young hot stars, to old cool stars, to seething remnants of stellar death called black holes. This activity occurs against a fiery backdrop in the crowded, hostile environment of the galaxy's core, the center of which is dominated by a supermassive black hole nearly four million times more massive than our Sun. Permeating the region is a diffuse blue haze of X-ray light from gas that has been heated to millions of degrees by outflows from the supermassive black hole as well as by winds from massive stars and by stellar explosions. Infrared light reveals more than a hundred thousand stars along with glowing dust clouds that create complex structures including compact globules, long filaments, and finger-like "pillars of creation," where newborn stars are just beginning to break out of their dark, dusty cocoons.

The unveilings will take place at 152 institutions nationwide, reaching both big cities and small towns. Each institution will conduct an unveiling celebration involving the public, schools, and local media.

The Astrophysics Division of NASA's Science Mission Directorate supports the International Year of Astronomy Great Observatories image unveiling. The project is a collaboration among the Space Telescope Science Institute in Baltimore, Md., the Spitzer Science Center in Pasadena, Calif., and the Chandra X-ray Center in Cambridge, Mass.

Images of the Milky Way galactic center region and a list of places exhibiting these images can be found at: