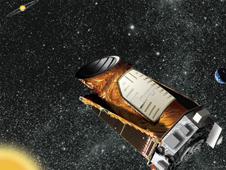 PASADENA, Calif. -- NASA's Kepler Mission has released 43 days of science data on more than 156,000 stars. These stars are being monitored for subtle brightness changes as part of an ongoing search for Earth-like planets outside of our solar system.

Astronomers will use the new data to determine if orbiting planets are responsible for brightness variations in several hundred stars. These stars represent a full range of temperatures, sizes and ages. Many of them are stable, while others pulsate. Some show starspots, which are similar to sunspots, and a few produce flares that would sterilize their nearest planets.

Kepler, a space observatory, looks for the data signatures of planets by measuring tiny decreases in the brightness of stars when planets cross in front of, or transit, them. The size of the planet can be derived from the change in the star's brightness.

The 28-member Kepler science team also is using ground-based telescopes and NASA's Hubble Space Telescope and Spitzer Space Telescope to perform follow-up observations on a specific set of 400 objects of interest. The star field that Kepler observes in the constellations Cygnus and Lyra can only be seen from ground-based observatories in spring through early fall. The data from these other observations will determine which of the candidates can be identified as planets. That data will be released to the scientific community in February 2011.

Without the additional information, candidates that are actual planets cannot be distinguished from false alarms, such as binary stars -- two stars that orbit each other. The size of the planetary candidates also can be only approximated until the size of the stars they orbit is determined from additional spectroscopic observations made by ground-based telescopes.

"I look forward to the scientific community analyzing the data and announcing new exoplanet results in the coming months," said Lia LaPiana, Kepler's program executive at NASA Headquarters in Washington.

"This is the most precise, nearly continuous, longest and largest data set of stellar photometry ever," said Kepler Deputy Principal Investigator David Koch of NASA's Ames Research Center in Moffett Field, Calif. "The results will only get better as the duration of the data set grows with time."

Kepler will continue conducting science operations until at least November 2012, searching for planets as small as Earth, including those that orbit stars in a warm, habitable zone where liquid water could exist on the surface of the planet. Since transits of planets in the habitable zone of solar-like stars occur about once a year and require three transits for verification, it is expected to take at least three years to locate and verify an Earth-size planet.

"The Kepler observations will tell us whether there are many stars with planets that could harbor life, or whether we might be alone in our galaxy," said the mission's science principal investigator, William Borucki of Ames.