Amazing Miniaturized 'SIDECAR' Drives Webb Telescope's Signal
Many technologies have become so advanced that they've been miniaturized to take up less space and weigh less. That's what happened to some electronics being built for the James Webb Space Telescope that will convert analog signals to digital signals and provide better images of objects in space when they're sent to scientists on Earth. The James Webb Space Telescope being built by Northrop Grumman. 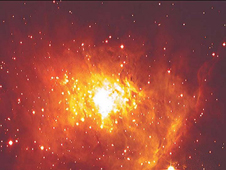 This image of star forming regions in Orion and S-140 was taken with the Univ. Hawaii’s 2.2 meter telescope and processed with four SIDECAR microprocessors. Credit: UHIA, D. Hall, K.W. Hodapp, C. Aspin
> Larger image The electronic components on the Webb telescope are called "SIDECAR ASIC." SIDECAR ASIC means "System for Image Digitization, Enhancement, Control And Retrieval Application Specific Integrated Circuit or ASIC. The SIDECAR has been miniaturized from a volume of about one cubic meter (35.3 cubic feet) down to a small circuit that fits in your hand.

SIDECAR is a tiny advanced low-noise, low-power microprocessor-based control chip that was designed by Teledyne Imaging Sensors, Thousand Oaks, Calif. It's about the size of a half-dollar and can do the same job as an electronics box weighing 20 pounds. Its smaller weight also makes it easier to launch. As the acronym implies, the SIDECAR sits next to the detector like a sidecar on a motorcycle. 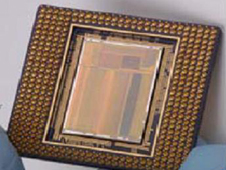 The SIDECAR ASIC is a small, half-dollar-sized microprocessor developed for use on the JWST. Also show is the SIDECAR ASIC in spaceflight package. Credit: Teledyne Imaging Systems
> Larger image "A smaller SIDECAR can be physically close to the detector it is controlling. This close proximity minimizes the distance the analog signal travels, thus reducing the noise of the system," said Matt Greenhouse, Integrated Science Instrument Module Scientist at NASA Goddard Space Flight Center, Greenbelt, Md.

The three instruments that will use the SIDECAR on the Webb telescope are the Near Infrared Camera (NIRCam), Near Infrared Spectrograph (NIRSpec), and the Fine Guidance Sensors (FGS). These instruments all use highly sensitive infrared detectors to study distant stars, planets, and galaxies.

Infrared light is a band of light on the electromagnetic spectrum with wavelengths longer than visible light but shorter than radio waves, and cannot be seen by the naked eye.

"The significant technical advancement in the SIDECAR is its very low noise (or interference with the data or images it's gathering) - the analog to digital conversion is nearly perfect, adding no significant noise; and its very low power - the SIDECAR consumes only 11milliwatts of power," said Markus Loose, lead designer of the SIDECAR at Teledyne. Low consumption of power is important for keeping the telescope's science instruments cold (37 Kelvin, or minus 400 F) as they collect faint (heat) signals from objects near the edge of the universe. 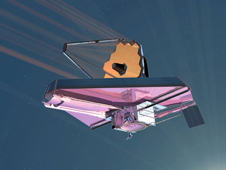 This is an artist's conception of what JWST will look like in space. Credit: NASA
> Larger image It's important to make sure SIDECAR is fully functional before it goes into the Webb telescope, so it's already being used to improve astronomy on the ground. Astronomers are "test-driving" four SIDECARs that were installed in early 2007 in the University of Hawaii's 2.2 meter telescope on Mauna Kea. Since then they have been collecting science data and giving scientists experience in operating the SIDECAR so that its performance is optimal by the time that the Webb telescope flies.

As a result of SIDECAR's success in the review and in ground-based telescopes other missions are planning to use it, and there's a plan to install it in the Hubble Space Telescope in 2008.