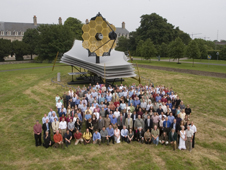 The full-scale James Webb Space Telescope model visited Dublin in June 2007. Credit: Richard Bent/NGC
> Larger image GREENBELT, Md. -- The full-scale model of the James Webb Space Telescope resumes its world tour with a stop in Montreal. The model will be on display July 13 through 20 in conjunction with the 37th Committee on Space Research (COSPAR) Scientific Assembly.

The model’s last public appearance was in Dublin, Ireland, where scientists, school children, media and the general public had the rare opportunity to view this tennis court-sized space observatory model up-close and learn about its mission. Over the last three years, the model has been displayed at similar events in Washington, D.C.; Rochester, N.Y.; Greenbelt, Md.; Paris, France; and Colorado Springs, Colo.

COSPAR, the Canadian Space Agency, and National Research Council Canada are sponsoring the model’s outdoor display at the Place des Vestiges in conjunction with the conference at le Palais des Congrès de Montréal. The conference will be attended by thousands of space science researchers from around the world, and experts will be on hand to answer questions.

The tennis-court sized model will be on display at the Place DesVestiges, courtesy of COSPAR, the Canadian Space Agency; the Old Port of Montreal; the Montreal Science Center; and COM DEV International Ltd., a Canadian manufacturer and designer of space hardware subsystems. COM DEV is funded for this work by the Canadian Space Agency .The COSPAR conference nearby at le Palais des Congrès de Montréal will be attended by thousands of space science researchers from around the world, and experts will be on hand to answer questions. 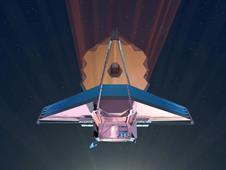 Artist's conception of the Webb Telescope in space. Credit: NASA
> Larger image The James Webb Space Telescope is a successor to the Hubble Space Telescope and will be NASA’s premier space observatory following its launch in 2013. It will orbit 940,000 miles from the Earth at the second Sun-Earth Lagrange point, capturing infrared images of every phase of our cosmic history – from the first luminous objects to assembly of galaxies, the birth of stars, and formation of planetary systems.

The COM DEV, one of the partners on the Webb Telescope, is providing the fine guidance sensor (FGS), which measures the positions of very faint stars very accurately to achieve the high quality images required by the mission’s scientific objectives. The FGS cameras will measure the position of guide stars with great accuracy, pinpointing stars to one millionth of a degree. COM DEV is also providing the Tunable Filter Instrument, which will take scientific pictures at specific wavelengths in the near infrared. The tunable filer, adjoining the FGS, will have unique capabilities for detecting the first stars and will search for planets around stars outside our solar system. Canada is also providing functional support of the science operations for the Webb telescope.

Northrop Grumman is NASA Goddard Space Flight Center’s prime contractor for the James Webb Space Telescope and is leading an industrial team in the design and development of this next-generation space observatory using cutting-edge technology. The mission is a joint project of NASA, the European Space Agency and the Canadian Space Agency.

For more information on the James Webb Space Telescope, visit:
http://jwst.gsfc.nasa.gov
› Back To Top