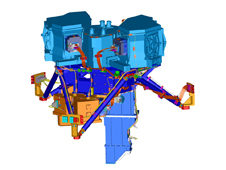 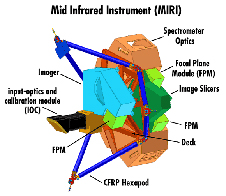 The MIRI optics module labeled to show different components. Credit: University of Leicester, European Consortium Institutes and JPL
› Larger image It's going to take infrared eyes to see farther back in time than even the Hubble Space Telescope, and that's what the James Webb Space Telescope's MIRI or Mid-Infrared Instrument detectors will do. Now there's a new short movie that shows what the MIRI detectors are all about and what they can do.

"The MIRI is one of four science instruments aboard the Webb telescope that is designed to record images and spectra at the longest wavelengths that the Webb telescope can observe," said Matt Greenhouse, Project Scientist for the science instrument payload. "The mid-infrared spectrum covers wavelengths in the range of 5 to 28 micrometers or microns (about 10 to 50 times longer than our eyes can see). Light in this portion of the spectrum is invisible to our eyes but is produced by all room-temperature objects and carries key information about the local and early universe," Greenhouse said. Light at these wavelengths is blocked by water vapor in the earth’s atmosphere and can only be efficiently observed using a telescope in space.

A new video about the MIRI detectors is part of an on-going series called "Behind the Webb" about the James Webb Space Telescope. It was produced and created by the Space Science Telescope Institute (STScI) of Baltimore, Md. and is available at www.webbtelescope.org. Part of the video was shot at NASA's Jet Propulsion Laboratory (JPL) in Pasadena, Calif. in January 2009. "It is a broadcast quality video in high definition and will be available in almost a dozen varieties of file formats from Quicktime, to WMV to Flash, to M4V, and all in different sizes," said Mary Estacion, News Video Producer at STScI.

The video runs exactly three minutes and explains how the three detectors on the MIRI work and the tests they endure to prepare them for the Webb telescope's launch and flight in space. The video is hosted by Estacion, who interviewed Dr. Michael Ressler, the MIRI Project Scientist at NASA JPL. In the video, Ressler explains what MIRI detectors do and how the MIRI sensor works by comparing it to a chip on a camera. The video also takes the viewer behind the scenes and into a clean room to show viewers how the MIRI detectors are tested.

To see the very first stars and galaxies, astronomers have to look deep into space and far back in time. Starlight travels through space at a finite speed (300,000 kilometers/second). So if we observe an object that is 300,000 kilometers away with the Webb telescope, we see it as it was 1 second in the past. Astronomical distances are measured in “light years”, the distance that light travels in a year. Galaxies can be billions of light years away. As a result of this transmission delay, astronomical telescopes, like the Webb, allow astronomers to literally look back in time and see the universe as it was billions of years in the past.

The space that fills the universe has been expanding since the Big Bang. As a consequence of this expansion, the wavelength of ultra-violet and visible light emitted by the first galaxies to form after the Big Bang has been stretched into the infrared portion of the spectrum, and can only be observed by telescopes that are equipped with infrared cameras such as the MIRI. "The Webb observatory design has been optimized to enable infrared observations that will, for the first time, enable astronomers to see the period in the evolution of the universe in which the first galaxies formed," Greenhouse said. "The MIRI will play a key role in enabling the very first observations of the galaxy formation epoch."

In addition to the huge discovery potential, MIRI will provide valuable information in the four areas of the Webb's science objectives: 1) Discovery of the 'first light' emitting objects after the Big Bang; 2) Assembly of galaxies: history of star formation, growth of black holes, prediction of heavy elements; 3) How stars and planetary systems form; and 4) Evolution of planetary systems and conditions for life.

The James Webb Space Telescope is the next-generation premier space observatory, exploring deep space phenomena from distant galaxies to nearby planets and stars. The Webb Telescope will enable scientists to observe the formation and evolution of the first galaxies and the evolution of our own solar system, from the first light after the Big Bang to the formation of planetary systems capable of supporting life. The Webb mission is a joint project of NASA, the European Space Agency and the Canadian Space Agency.

To view the new video on MIRI, visit:

To understand the mid-infrared spectrum that the MIRI sees, visit: