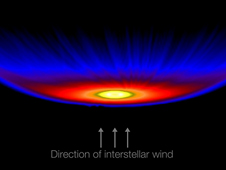 > View movie
> View other resolutions
This movie compares a Hubble image of the debris disk around HD 61005, a young star located 100 light-years away in the constellation Puppis, to a three-dimensional model based on gas drag. Credit: NASA/J. Debes, M. Kuchner (GSFC) and A. Weinberger (CIW) The dust-filled disks where new planets may be forming around other stars occasionally take on some difficult-to-understand shapes. Now, a team led by John Debes at NASA's Goddard Space Flight Center in Greenbelt, Md., finds that a star's motion through interstellar gas can account for many of them.

"The disks contain small comet- or asteroid-like bodies that may grow to form planets," Debes said. "These small bodies often collide, which produces a lot of fine dust." As the star moves through the galaxy, it encounters thin gas clouds that create a kind of interstellar wind. "The small particles slam into the flow, slow down, and gradually bend from their original trajectories to follow it."

Far from being empty, the space between stars is filled with patchy clouds of low-density gas. When a star encounters a relatively dense clump of this gas, the resulting flow produces a drag force on any orbiting dust particles. The force only affects the smallest particles -- those about one micrometer across, or about the size of particles in smoke.

"This fine dust is usually removed through collisions among the particles, radiation pressure from the star's light and other forces," explained Debes. "The drag from interstellar gas just takes them on a different journey than they otherwise would have had." 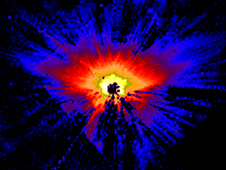 > Larger image
The inner, yellow portion of HD 61005's disk spans 5.4 billion miles, or about the width of Neptune's orbit in our own solar system. This false-color Hubble view masks the star's direct light to bring out detail in the disk. Credit: NASA/ESA/D. Hines (Space Science Inst., New Mexico) and G. Schneider (Univ. of Arizona) Working with Alycia Weinberger at the Carnegie Institution of Washington and Goddard astrophysicist Marc Kuchner, Debes was using the Hubble Space Telescope to investigate the composition of dust around the star HD 32297, which lies 340 light-years away in the constellation Orion. He noticed that the interior of the dusty disk -- a region comparable in size to our own solar system -- was warped in a way that matched a previously known warp at larger distances.

"Other research indicated there were interstellar gas clouds in the vicinity," Debes said. "The pieces came together to make me think that gas drag was a good explanation for what was going on."

As dust particles respond to the interstellar wind, a debris disk can morph into peculiar shapes determined by the details of its collision with the gas cloud. In a face-on encounter, such as that of the star HD 61005 in the constellation Puppis, the disk's edge bends gently away from the direction of motion. Fine dust trails behind, forming a cylindrical wake. If the disk instead slices edgewise through interstellar gas, the resulting headwind blows away fine dust from the portion inside the cloud, resulting in a lop-sided disk.

"The drag from interstellar gas only affects the outskirts of the disk, where the star's gravity can't really hold onto the material," Weinberger said.

The systems studied are about 100 million years old and resemble our own solar system shortly after the major planets formed. Although astronomers don't know whether planets lurk within the disks of these systems, a better understanding of processes affecting a disk's outer regions will shed light on how "ice giant" planets like Uranus and Neptune -- and the more distant swarm of small, icy bodies known as the Kuiper Belt -- formed within the solar system.

Astronomers have sometimes attributed warps and bends in debris disks to the presence of undiscovered planets or to past encounters with another star. "But we expect interstellar gas to be around -- it's everywhere," Debes said. "It's important to consider the ecology of these debris disks before running to such conclusions, and this model explains a lot of the weirdly shaped disks we see."

A paper describing the model appears in the September 1 issue of The Astrophysical Journal.