Grow Text SizeShrink Text Size
So You Think You Can Solve a Cosmology Puzzle? 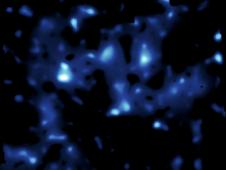 This map shows the distribution of dark matter in a portion of our universe. Image credit: NASA/ESA/Caltech
› Full image and caption

Scientists challenge other scientists with a series of galaxy puzzles

Cosmologists have come up with a new way to solve their problems. They are inviting scientists, including those from totally unrelated fields, to participate in a grand competition. The idea is to spur outside interest in one of cosmology's trickiest problems -- measuring the invisible dark matter and dark energy that permeate our universe.

The results will help in the development of new space missions, designed to answer fundamental questions about the history and fate of our universe.

"We're hoping to get more computer scientists interested in our work," said cosmologist Jason Rhodes of NASA's Jet Propulsion Laboratory in Pasadena, Calif., who is helping to organize the challenge, which begins on Dec. 3, 2010. "Some of the mathematical problems in our field are the same as those in machine-learning applications -- for example facial-recognition software."

This year, the competition, which has operated since 2008, is called GREAT 2010, after GRavitational lEnsing Accuracy Testing. The challenge is to solve a series of puzzles involving distorted images of galaxies. Occasionally in nature, a galaxy is situated behind a clump of matter that is causing the light from the galaxy to bend. The result is a magnified and skewed image of the galaxy. In the most extreme cases, the warping results in multiple images and even a perfect ring, called an Einstein Ring after Albert Einstein, who predicted the effect. But most of the time, the results are more subtle and a galaxy image is distorted just a tiny bit -- not even enough to be perceived by eye. This is called weak gravitational lensing, or just weak lensing for short.

Weak lensing is a powerful tool for unlocking the fabric of our universe. Only four percent of our universe consists of the stuff that makes up people, stars and anything with atoms. Twenty-four percent is dark matter -- a mysterious substance that we can't see but which tugs on the regular matter we can see. Most of our universe, 72 percent, consists of dark energy, which is even more baffling than dark matter. Dark energy is gravity's nemesis -- where gravity pulls, dark energy pushes. By studying lensed, or distorted, galaxies, scientists can create better maps of dark matter -- and by studying how dark matter changes over time, they can better understand dark energy.

Weak lensing is a promising method for tackling these questions. The 2010 U.S. National Research Council Decadal Survey on astronomy and astrophysics has ranked mission proposals using this method as high priorities.

The GREAT 2010 challenge is designed to improve weak-lensing know-how. Participants will start with fuzzy pictures of galaxies that have been distorted ever so slightly by invisible dark matter parked in front of them. The effect is so small that you can't see it with your eyes. The problem is even trickier because the telescopes are also distorting the galaxy images to an even greater degree than the dark matter. It takes complex techniques -- mathematical models and image-analysis algorithms -- to tease apart these various influences and ultimately discover how dark matter is warping a galaxy's shape.

"This is an image-analysis challenge. You don't need to be an astronomer or cosmologist to help measure the weak-lensing effect," said Kitching. "This challenge is meant to encourage a multidisciplinary approach to the problem."

Participants will have nine months to solve a series of thousands of puzzles. The winners will be announced at a closing ceremony and workshop held at JPL. Prize-winners can expect some kind of cool gadget -- as well as the satisfaction of having brought the world one step closer to understanding what makes our universe tick.

To participate in the venture, in-depth technical information is available online at: http://www.greatchallenges.info .

JPL is managed by the California Institute of Technology in Pasadena, for NASA.