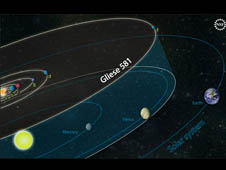 The planetary orbits of the Gliese 581 system compared to those of our own solar system. Image Credit: National Science Foundation.
› Larger image 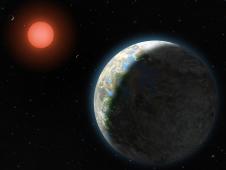 This artist's conception shows the inner four planets of the Gliese 581 system and their host star. Image Credit: Lynette Cook.
› Larger image
A team of planet hunters from the University of California (UC) Santa Cruz, and the Carnegie Institution of Washington has announced the discovery of a planet with three times the mass of Earth orbiting a nearby star at a distance that places it squarely in the middle of the star's "habitable zone."

This discovery was the result of more than a decade of observations using the W. M. Keck Observatory in Hawaii, one of the world's largest optical telescopes. The research, sponsored by NASA and the National Science Foundation, placed the planet in an area where liquid water could exist on the planet's surface. If confirmed, this would be the most Earth-like exoplanet yet discovered and the first strong case for a potentially habitable one.

To astronomers, a "potentially habitable" planet is one that could sustain life, not necessarily one where humans would thrive. Habitability depends on many factors, but having liquid water and an atmosphere are among the most important.

The new findings are based on 11 years of observations of the nearby red dwarf star Gliese 581using the HIRES spectrometer on the Keck I Telescope. The spectrometer allows precise measurements of a star's radial velocity (its motion along the line of sight from Earth), which can reveal the presence of planets. The gravitational tug of an orbiting planet causes periodic changes in the radial velocity of the host star. Multiple planets induce complex wobbles in the star's motion, and astronomers use sophisticated analyses to detect planets and determine their orbits and masses.

"Keck's long-term observations of the wobble of nearby stars enabled the detection of this multi-planetary system," said Mario R. Perez, Keck program scientist at NASA Headquarters in Washington. "Keck is once again proving itself an amazing tool for scientific research."

Steven Vogt, professor of astronomy and astrophysics at UC Santa Cruz, and Paul Butler of the Carnegie Institution lead the Lick-Carnegie Exoplanet Survey. The team's new findings are reported in a paper published in the Astrophysical Journal and posted online at:


http://arxiv.org
"Our findings offer a very compelling case for a potentially habitable planet," said Vogt. "The fact that we were able to detect this planet so quickly and so nearby tells us that planets like this must be really common."

The new planet designated Gliese 581g has a mass three to four times that of Earth and orbits its star in just under 37 days. Its mass indicates that it is probably a rocky planet with a definite surface and enough gravity to hold on to an atmosphere.

Gliese 581, located 20 light years away from Earth in the constellation Libra, has two previously detected planets that lie at the edges of the habitable zone, one on the hot side (planet c) and one on the cold side (planet d). While some astronomers still think planet d may be habitable if it has a thick atmosphere with a strong greenhouse effect to warm it up, others are skeptical. The newly-discovered planet g, however, lies right in the middle of the habitable zone.

The planet is tidally locked to the star, meaning that one side is always facing the star and basking in perpetual daylight, while the side facing away from the star is in perpetual darkness. One effect of this is to stabilize the planet's surface climates, according to Vogt. The most habitable zone on the planet's surface would be the line between shadow and light (known as the "terminator").