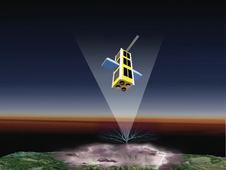 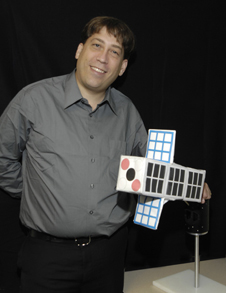 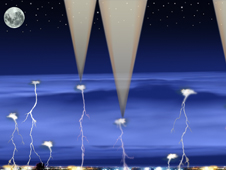 Massive energy releases occur every day in the upper reaches of Earth's atmosphere. Lightning may give rise to these bursts of radiation. However, unlike the well-known flashes of light and peals of thunder familiar to Earth-dwellers, these energy releases are channeled upward and can be detected only from space. Our atmosphere protects us from the effects of this radiation, but the mechanisms at work can impact Earth's upper atmosphere and its space environment.

TGFs are likely produced by beams of very energetic electrons, which are accelerated in the intense electric fields generated by large thunderstorm systems. Before CGRO, many scientists thought these very energetic types of radiation could be generated only near the Sun, or in black holes, large galaxies, or neutron stars.

"These electron beams are more powerful than any produced in near-Earth space, and understanding their acceleration mechanisms will shed light on a physical process that may occur on other planets, or in astrophysical environments, as well as in the sun's corona," said Doug Rowland, principal investigator for the Firefly mission at NASA Goddard's Space Weather Laboratory.

Firefly will explore which types of lightning produce these electron beams and associated TGFs. In addition, Firefly will explore the occurrence rate of TGFs that are weaker than any previously been studied. The result with be a better understanding of the effect that the millions of lightning flashes that occur worldwide each day have on the Earth's upper atmosphere and near-Earth space environment.

"This mission could provide the first direct evidence for the relationship between lightning and TGFs, and addresses an important research question in atmospheric electricity," said Anne-Marie Schmoltner, head of NSF's Atmospheric Sciences Division's Lower Atmosphere Research Section. "Identifying the source of terrestrial gamma ray flashes would be a great step toward fully understanding the physics behind lightning and its effect on the Earth's atmosphere."

The NSF CubeSat program represents a new "low cost access to space" approach to performing high-quality, targeted science on a smaller budget than is typical of larger satellite projects, which have price tags starting at $100 million. In contrast, the CubeSat Firefly will carry out its science mission in a much smaller package and at a considerably lower cost. The nano satellite is about the size of a football (4 by 4 by 12 inches). The cost to develop, launch, and operate Firefly for three years during its science mission is expected to be less than $1 million.

The Firefly mission also emphasizes student involvement as part of the ongoing effort to train the next generation of scientists and engineers. Students at Siena College, in Loudonville, N.Y., and the University of Maryland Eastern Shore, in Princess Anne, Md., will be involved in all phases of the Firefly mission.

"Integrating innovative and creative educational efforts with front-line research is what NSF is all about," said NSF Deputy Director Kathie L. Olsen. "The new CubeSat program uses the transformational technology of CubeSats to do just that. The Firefly mission is a terrific example of a program that will pursue scientific discovery, while providing unique and inspiring educational opportunities."

NASA Goddard, USRA, and Siena College will provide the instrument payload, while the Hawk Institute will build the CubeSat. NASA's Wallops Flight Facility on Wallops Island, Va., will provide technical oversight for the integration of Firefly to the launch vehicle.

Firefly's launch date is likely to be in 2010 or 2011. The micro satellite will fly as a secondary payload inside a Poly-Picosatellite Orbital Deployer (P-POD) provided by California Polytechnic State University, San Luis Obispo, Calif. Firefly will utilize the excess room and lift capacity not required by the primary mission payload.