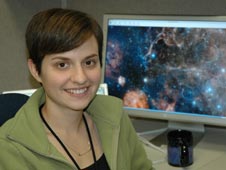 About 10 years ago, scientists reached the astonishing conclusion that our universe is accelerating apart at ever-increasing speeds, stretching space and time itself like melted cheese. The force that's pushing the universe apart is still a mystery, which is precisely why it was dubbed "dark energy."

But is dark energy really real? Is our universe really accelerating? These questions hang around in the mind of Ali Vanderveld, a post-doctoral cosmologist at JPL. Vanderveld and her colleagues recently published a paper in the journal Physical Review looking at how giant holes in our "Swiss-cheese-like" universe might make space look as if it's accelerating when it's really not. They concluded these holes, or voids, are not sufficient to explain away dark energy; nevertheless, Vanderveld says it's important to continue to question fundamental traits of the very space we live in.

"Sometimes we take dark energy for granted," said Vanderveld. "But there are other theories that could explain why the universe appears to be moving apart at faster and faster speeds."

Why do scientists think the universe is accelerating? A large part of the evidence comes from observations taken over the last decade or so of very distant, colossal star explosions called supernovae. JPL's Wide-Field and Planetary Camera 2 on NASA's Hubble Space Telescope contributed to this groundbreaking research. Astronomers had already figured out that space, since its inception about 13.7 billion years ago in a tremendous "Big Bang" explosion, is expanding. But they didn't know if this expansion was happening at a constant rate, and even speculated that it could be slowing down. By examining distant supernovae billions of light-years away, scientists could get a look at how the expansion of space behaves over time.

The results were baffling. The more distant supernovae were dimmer than predicted, which would suggest they are farther away than previously believed. If they are farther away, then this means the space between us and the supernovae is expanding at ever-increasing speeds. Additional research has since pointed to an accelerating universe.

A group of researchers from Fermi National Accelerator Laboratory in Batavia, Ill., recently invoked what's called the Swiss-cheese model of the universe to explain why these supernovae might appear to be moving faster away from us than they really are. The universe is made up of lumps of matter interspersed with giant holes, or voids, somewhat like Swiss cheese. In fact, last year, astronomers at the University of Minnesota, Twin Cities, reported finding the king of all known voids, spanning one billion light-years. In other words, it would take light -- which holds the title for fastest stuff in the universe -- one billion years to go from one side of the void to the other!

The researchers at Fermi said these voids might lie between us and the supernovae being observed, acting like concave lenses to make the objects appear dimmer and farther than they really are. If so, then the supernova might not be accelerating away from us after all. Their theory claimed to provide a way in which dark energy might go poof.

Vanderveld and her colleagues at Cornell University, Ithaca, N.Y., looked more closely at this theory and found a few "holes." The group at Fermi had assumed a bunch of voids would line up between us and the supernovae, but Vanderveld's group said, in reality, the voids would be distributed more randomly -- again like Swiss cheese. With this random distribution, the voids are not enough to explain away dark energy.

"The lumpiness of the universe could still be tricking us into thinking it's accelerating," said Vanderveld. "But we did not find this to be the case with our best, current models of the universe."

There is, however, one other freakish possibility that could mean a void is creating the illusion of an accelerating universe. If our solar system just happened to sit in the middle of a void, then that void would distort our observations. Said Vanderveld, "It's really hard to tell if we're in a void, but for the most part this possibility has been ruled out."