Astronomers may be closer than ever to discovering a planet that’s habitable like our own, but along the way they’ve discovered some very scary exoplanets – places where conditions are far too harsh for life as we know it to exist.

We’ve rounded up some of the most frightening, deadly exoplanets, places that make even the scariest haunted house on Earth pale in comparison. 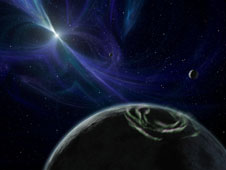 The pulsar planets PSR B1257+12 b, c, and d are all that remains of a dead solar system. They are constantly beamed with intense radiation. (Artist's concept)
> Larger Image
Radiation Bath, Anyone?

The exoplanets PSR B1257+12 b, c and d were among the first discovered, and also happen to be three of the weirdest. The entire system is a graveyard, remnants of what used to be a normal, functional solar system before the star blew apart in a giant explosion known as a supernova.

The massive shockwave from the supernova stripped away any atmosphere or living creatures that might have once lived on these planets, leaving behind ghostly, rocky shells, dead planets orbiting the corpse of an extinct star.

Except that PSR B1257+12 isn’t all dead - the remaining core from the old star has become a zombie star called a pulsar. Literally spinning in its grave, PSR B1257+12 makes a full rotation every 6.22 milliseconds and emits an intense beam of radiation that can be detected from Earth. The star’s unfortunate planets are thus bathed in deadly radiation on a regular basis, making sure that this system remains a cosmic no-man’s land. 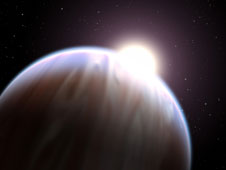 The sound of howling wind is a must for any Earth-based haunted house, but weather conditions on HD 189733 b make it a very dangerous place to go trick-or-treating.

At first glance, HD 189733 b looks like the typical “hot Jupiter” – a huge gas planet perched dangerously close to a burning-hot star, with daytime temperatures around a balmy 1,770 degrees Fahrenheit. HD 189733 b is “tidally locked” in its orbit, meaning that the same side of the planet always faces its star.

But when scientists measured the planet’s nighttime temperature, they were shocked to find that it was only 500 degrees cooler. How does the back side of the planet stay so warm?

The answer is wind: insanely fast, dangerous wind that whisks heat from day-side to night-side at a speed of 4,500 mph, nearly six times the speed of sound. In fact, astronomers estimate that wind speeds might top out at 22,000 mph, conditions that make hurricanes on Earth look like a breezy day at the beach.

Needless to say, kite-flying on HD 189733 b is not recommended – unless you’re flying one from the cockpit of a fighter jet. 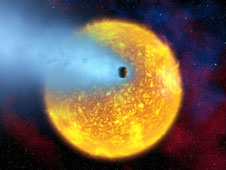 HD 209458’s boiling atmosphere is being ripped from the planet as it orbits its star. (Artist's concept)
> Larger Image Boil, Boil, Toil and Trouble

The planet HD 209458 b has a few things in common with Earth: water vapor, methane, and carbon dioxide in its atmosphere, key ingredients for life on our planet. Don’t be fooled, though, because this planet is a roiling cauldron of almost unimaginable heat.

Even the hottest summer days on Earth don’t get as dangerous as the conditions on HD 209458 b, a planet that orbits so close to its host star that its atmosphere is literally boiling off, ripped away from the planet as it whips around on its breakneck 3.5-day orbit. The gas that escapes from HD 209458 b forms a tail about 124,000 miles (200,000 km) long.

Scientists have found many planets like HD 209458 b – huge gas giants that orbit hazardously close to their stars and have hellishly hot, poisonous atmospheres. Sometimes, planets like these can be in danger of being swallowed whole by their host stars, as may be the case for the doomed world WASP-18b.

As far as planets go, WASP-18b is on death’s doorstep. There’s a good chance that it will be torn apart completely within the next million years, when it finally spirals too close to its star. Scientists will know within 10 years whether or not WASP-18b is on a funeral march towards its untimely demise. 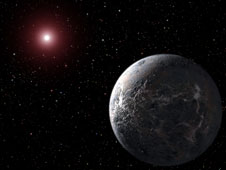 With an estimated temperature of just 50K, OGLE-2005-BLG-390L b is the chilliest exoplanet yet discovered. (Artist's concept)
> Larger Image All Alone and Very, Very Cold

While most of the exoplanets found so far are hellishly hot, OGLE-2005-BLG-390L b has the distinction of being the coldest exoplanet yet discovered.

The planet takes about 10 Earth years to orbit its tiny dwarf star, and it’s a chilly trip; the average temperature on OGLE-2005-BLG-390L b is 50 Kelvin, or minus 370 degrees Fahrenheit. A good costume for trick-or-treating on this frigid planet would be a toasty self-heating spacesuit, an oxygen supply, ice skates and plenty of hot cocoa.

Of course, don’t expect to find many houses with candy here, because despite the fact that it’s just a few times bigger than Earth, OGLE-2005-BLG-390L b is an uninhabitable ice ball stuck in a perpetual winter freeze. Even the coldest Halloween night in Antarctica is a balmy paradise compared to this frosty world.

Written By Joshua Rodriguez/PlanetQuest
› Back To Top