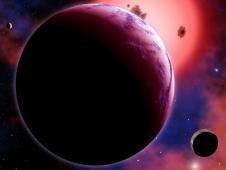 PASADENA, Calif. -- A team of astronomers, including two NASA Sagan Fellows, has made the first characterizations of a super-Earth's atmosphere, by using a ground-based telescope. A super-Earth is a planet up to three times the size of Earth and weighing up to 10 times as much. The findings, reported in the Dec. 2 issue of the journal Nature, are a significant milestone toward eventually being able to probe the atmospheres of Earth-like planets for signs of life.

The team determined the planet, GJ 1214b, is either blanketed with a thin layer of water steam or surrounded by a thick layer of high clouds. If the former, the planet itself would have an icy composition. If the latter, the planet would be rocky or similar to the composition of Neptune, though much smaller.

"This is the first super-Earth known to have an atmosphere," said Jacob Bean, a NASA Sagan Fellow and astronomer at the Harvard-Smithsonian Center for Astrophysics in Cambridge, Mass. "But even with these new measurements, we can't say yet what that atmosphere is made of. This world is being very shy and veiling its true nature from us."

GJ 1214b, first discovered in December 2009, is 2.7 times the size of Earth and 6.5 times as massive. Previous observations of the planet's size and mass demonstrated it has a low density for its size, leading astronomers to conclude the planet is some kind of solid body with an atmosphere.

Bean and his team observed infrared light as the planet crossed in front of its star. During such transits, the star's light filters through the atmosphere. Gases absorb the starlight at particular wavelengths, leaving behind chemical fingerprints detectable from Earth. This same type of technique has been used to study the atmospheres of distant "hot Jupiters," or Jupiter-like planets orbiting close to their stars, and found gases like hydrogen, methane and sodium vapor.

In the case of the super-Earth, no chemical fingerprints were detected; however, this doesn't mean there are no chemicals present. Instead, this information ruled out some possibilities for GJ 1214b's atmosphere, and narrowed the scope to either an atmosphere of water steam or high clouds. Astronomers believe it's more likely the atmosphere is too thin around the planet to let enough light filter through and reveal chemical fingerprints.

"A steamy atmosphere would have to be very dense – about one-fifth water vapor by volume -- compared to our Earth, with an atmosphere that's four-fifths nitrogen and one-fifth oxygen with only a touch of water vapor," Bean said. "During the next year, we should have some solid answers about what this planet is truly like."

The team, which included Bean's co-authors -- Eliza Miller-Ricci Kempton, a NASA Sagan Fellow at the University of California in Santa Cruz, and Derek Homeier of the Institute for Astrophysics in Gottingen, Germany -- examined GJ 1214b using the ground-based Very Large Telescope at Paranal Observatory in Chile.

"This is an important step forward, narrowing our understanding of the atmosphere of this planet," said NASA Exoplanet Exploration Program Scientist Douglas Hudgins at NASA Headquarters in Washington. "Bizarre worlds like this make exoplanet science one of the most compelling areas in astrophysics today."

The Sagan Fellowship Program is administered by the NASA Exoplanet Science Institute at the California Institute of Technology in Pasadena. Its purpose is to advance the scientific and technical goals of NASA's Exoplanet Exploration Program. The program is managed for NASA by the Jet Propulsion Laboratory in Pasadena, Calif. Caltech manages JPL for NASA.