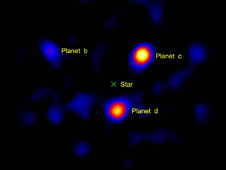 This image shows the light from three planets orbiting a star 120 light-years away. The planets' star, called HR8799, is located at the spot marked with an "X." Image credit: NASA/JPL-Caltech/Palomar Observatory
› Full image and caption 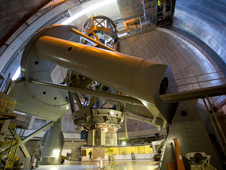 PASADENA, Calif. -- Astronomers have snapped a picture of three planets orbiting a star beyond our own using a modest-sized telescope on the ground. The surprising feat was accomplished by a team at NASA's Jet Propulsion Laboratory in Pasadena, Calif., using a small portion of the Palomar Observatory's Hale Telescope, north of San Diego.

The planets had been imaged previously by two of the world's biggest ground-based telescopes -- one of the two 10-meter (33-foot) telescopes of W.M. Keck Observatory and the 8.0-meter (26-foot) Gemini North Observatory, both on Mauna Kea in Hawaii. The planets, which orbit the star HR 8799, were among the very first to be directly imaged, a discovery announced in Nov. of 2008.

The new image of the planets, taken in infrared light as before, was captured using just a 1.5-meter-diameter (4.9-foot) portion of the Hale telescope's mirror. The astronomy team took painstaking efforts to push current technology to the point where such a small mirror could be used. They combined two techniques -- adaptive optics and a coronagraph -- to minimize the glare from the star and reveal the dim glow of the much fainter planets.

The picture is online at http://www.nasa.gov/topics/universe/features/exoplanet20100414-a.html.

"Our technique could be used on larger ground-based telescopes to image planets that are much closer to their stars, or it could be used on small space telescopes to find possible Earth-like worlds near bright stars," said Gene Serabyn, an astrophysicist at JPL and visiting associate in physics at the California Institute of Technology in Pasadena. Serabyn is lead author of a report on the findings in the April 15 issue of the journal Nature.

The three planets, called HR8799b, c and d, are thought to be gas giants similar to Jupiter, but more massive. They orbit their host star at roughly 24, 38 and 68 times the distance between our Earth and sun, respectively (our Jupiter resides at about five times the Earth-sun distance). It's possible that rocky worlds like Earth circle closer to the planets' star, but with current technology, they would be impossible to see under the star's glare.

The star HR 8799 is a bit more massive than our sun, and much younger, at about 60 million years, compared to our sun's approximately 4.6 billion years. It is 120 light-years away in the constellation Pegasus. This star's planetary system is still active, with bodies crashing together and kicking up dust, as recently detected by NASA's Spitzer Space Telescope (http://spitzer.caltech.edu/news/1000-feature09-16-Unsettled-Youth-Spitzer-Observes-a-Chaotic-Planetary-System). Like fresh-baked bread out of the oven, the planets are still warm from their formation and emit enough infrared radiation for telescopes to see.

To take a picture of HR 8799's planets, Serabyn and his colleagues first used a method called adaptive optics to reduce the amount of atmospheric blurring, or to take away the "twinkle" of the star. This technique was optimized by using only a small piece of the telescope. Once the twinkle was removed, the light from the star itself was blocked using the team's coronograph, an instrument that selectively masks out the star. A novel "vortex coronagraph," invented by team member Dimitri Mawet of JPL, was used for this step. The final result was an image showing the light of three planets.

"The trick is to suppress the starlight without suppressing the planet light," said Serabyn.

The technique can be used to image the space lying just fractions of a degree from a star (about one degree divided by roughly 10,000). This is as close to the star as that achieved by Gemini and Keck -- telescopes that are about five and seven times larger, respectively.

Keeping telescopes small is critical for space missions. "This is the kind of technology that could let us image other Earths," said Wesley Traub, the chief scientist for NASA's Exoplanet Exploration Program at JPL. "We are on our way toward getting a picture of another pale blue dot in space."

JPL is a partner with the California Institute of Technology in Pasadena in the Palomar Observatory. Caltech manages JPL for NASA. More information about exoplanets and NASA's planet-finding program is at http://planetquest.jpl.nasa.gov. More information about the Palomar Observatory is at http://www.astro.caltech.edu/palomar/ .