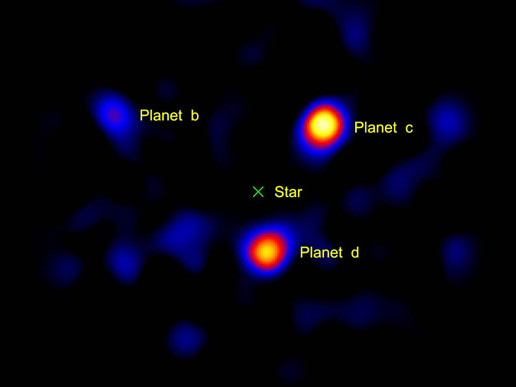 This image shows the light from three planets orbiting a star 120 light-years away. The planets' star, called HR8799, is located at the spot marked with an "X."

This picture was taken using a small, 1.5-meter (4.9-foot) portion of the Palomar Observatory's Hale Telescope, north of San Diego, Calif. This is the first time a picture of planets beyond our solar system has been captured using a telescope with a modest-sized mirror -- previous images were taken using larger telescopes.

The three planets, called HR8799b, c and d, are thought to be gas giants like Jupiter, but more massive. They orbit their host star at roughly 24, 38 and 68 times the distance between our Earth and sun, respectively (Jupiter resides at about 5 times the Earth-sun distance).