Grow Text SizeShrink Text Size
How to Probe an Exoplanet 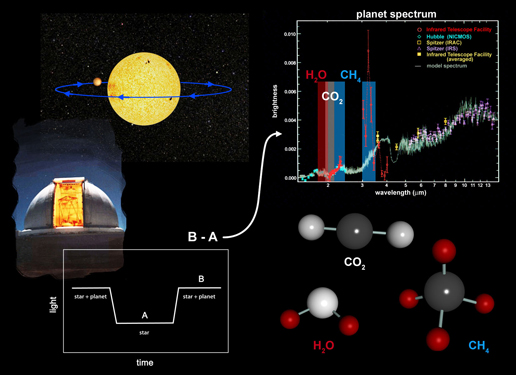 This chart explains how astronomers measure the signatures of chemicals in the atmospheres of planets that orbit other stars, called exoplanets. This technique was recently applied to a star system, called HD 189733, from a telescope on the ground; previously, the technique had only been used from space telescopes. The telescope, NASA's Infrared Telescope Facility atop Mauna Kea, Hawaii, is illustrated along with the planetary system at upper left. Astronomers say this technique, when used with future space telescopes, would enable the atmospheric study of even smaller planets, perhaps even Earth-like ones expected to be discovered in coming years.

To detect the chemicals in the atmospheres, astronomers measure light from the star system as its planet, which is lined up edge-on from our point of view, orbits around. The total light is measured (B in the chart at lower left), and then, when the planet disappears behind the star, the light of the star alone is measured (A). By subtracting A from B, you get light from just the planet. A breakdown of this light into its basic wavelength components is then plotted out to reveal the "fingerprints" of chemicals. These data, shown at upper right, are called a spectrum. The molecular drawings at lower right show the three molecules identified so far in the planet HD 189733b -- water, carbon dioxide and methane.