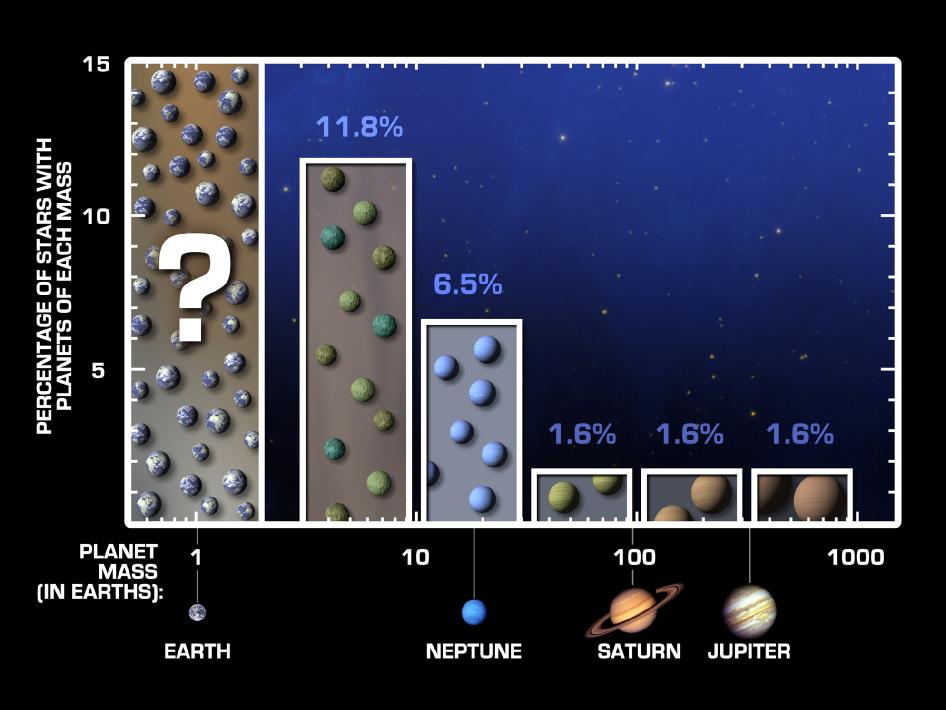 A new survey, funded by NASA and the University of California, reveals that small planets are more common than large ones. The extensive survey used the W.M. Keck Observatory in Hawaii to count planets of various masses, ranging from three to 1,000 times the mass of Earth, around 166 sun-like stars. All of the planets orbit fairly close to their stars, within a quarter of the Earth-sun distance. Currently, ground-based planet-hunting technology cannot detect planets as small as Earth. It can detect the so-called "super-Earths" in orbits that are close to their parent stars, and larger planets at a range of distances.

The data, depicted here in this illustrated bar chart, show a clear trend. Small planets outnumber larger ones. Astronomers extrapolated from these data to estimate the frequency of the Earth-size planets -- nearly one in four sun-like stars, or 23 percent, are thought to host Earth-size planets orbiting close in.

Each bar on this chart represents a different group of planets, divided according to their masses. In each of the three highest-mass groups, with masses comparable to Saturn and Jupiter, the frequency of planets around sun-like stars was found to be 1.6 percent. For intermediate-mass planets, with 10 to 30 times the mass of Earth, or roughly the size of Neptune and Uranus, the frequency is 6.5 percent. And the super-Earths, weighing in at only three to 10 times the mass of Earth, had a frequency of 11.8 percent.