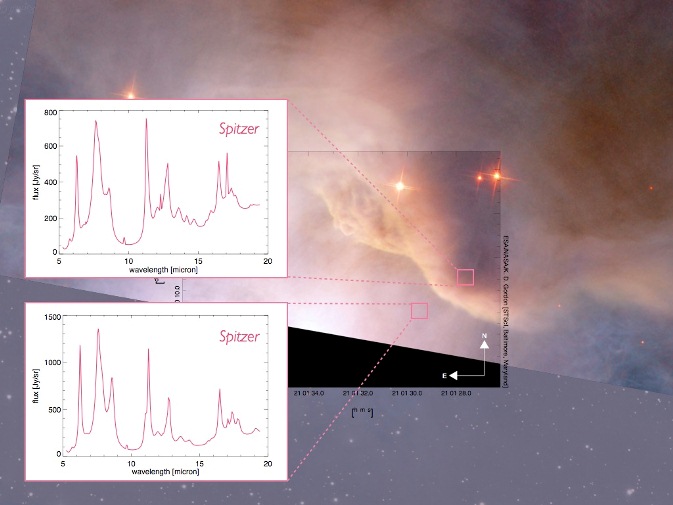 For the first time, scientists are able to automatically interpret previously unknown infrared emissions from space that come from surprisingly complex organic molecules, called polycyclic aromatic hydrocarbons (PAHs), which are abundant and important across the universe. They use spectra of infrared radiation to identify unknown substances in space. These spectra are as good as fingerprints for identification purposes. Analyzing the PAH bands represents a powerful new astronomical tool to trace the evolution of cosmic carbon and, at the same time, probe conditions across the universe. Image credit: NASA Ames 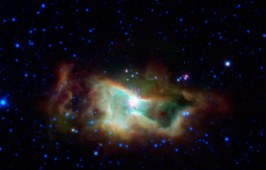 Between 2003 and 2005, thanks to its unprecedented sensitivity, NASA’s Spitzer Space Telescope created maps of the tell-tale PAH signature across large regions of space. Image credit: NASA JPL Scientists at NASA's Ames Research Center, Moffett Field, Calif., now have the capability to systematically investigate the molecular evolution of cosmic carbon. For the first time, these scientists are able to automatically interpret previously unknown infrared emissions from space that come from surprisingly complex organic molecules, called polycyclic aromatic hydrocarbons (PAHs), which are abundant and important across the universe.

Between 2003 and 2005, thanks to its unprecedented sensitivity, NASA's Spitzer Space Telescope, managed and operated by NASA's Jet Propulsion Laboratory, Pasadena, Calif., created maps of the tell-tale PAH signature across large regions of space, from hot regions of harsh ultraviolet (UV) radiation close to stars, to cold, dark clouds where stars and planets form. By exclusively using their unique collection of authentic PAH spectra, coupled with algorithm-driven, blind-computational analyses, scientists at Ames were able to interpret the cosmic infrared maps with complex organic molecules. They found that PAHs changed significantly in size, electrical charge and structure, to adjust to the different environment at each spot in the map. Carbon is one of the most abundant atoms in space and scientists believe that the spectral changes across these maps trace the molecular evolution of carbon across the universe.

"At the time of our discovery that the 'signature,' or identifying spectrum, of this unexpected, but common infrared (IR) radiation from space hinted that PAHs might be responsible, we were limited to a handful of small PAHs, very few were available to study," said Louis Allamandola, an astrophysics researcher at Ames. "To test the idea that PAHs were responsible, we measured and computed PAH spectra under astronomical conditions, creating the world's largest collection of PAH spectra. Today, our collection contains more than 700 PAH spectra."

To determine the spectral changes across these maps, these astrophysicists used the PAH spectra collected in the PAH IR Spectroscopic Database at Ames. They analyzed the Spitzer IR map of the Iris Nebula (NGC 7023) that hosts both the extreme environment of a region close to a star as well as the more shielded, benign environment of a cold molecular cloud.

The new maps showed that small, electrically neutral, irregularly-shaped PAHs are most important near the cold molecular cloud that is far from the star that excites PAH emission. However, when PAHs move closer to the exciting star and away from the cold cloud, they become large, symmetric and are electrically charged. "The large PAHs take over because they are more robust than the smaller, irregularly-shaped PAHs, which are destroyed by the unshielded star light," said Christiaan Boersma, an astrophysicist at Ames.

Finally, these large PAHs are themselves broken down, as they are stripped of hydrogen and become small fragments. At this point, the emission from the dehydrogenated PAHs takes over in the observed region. There were two findings that are especially important: the first is that positively-charged, nitrogen-containing PAH cations are needed to complete the match between the correct spectral signature and the observed emission, and the second is that dehydrogenation and fragmentation occur close to the exciting star.

"The indication of nitrogen-containing PAHs (PANHs) is significant, as these have not been seriously considered previously. They represent an important class of prebiotic molecules, which are precursors to life," said Jesse Bregman, also an astrophysicist at Ames. "If borne out, this indicates complex, nitrogen-containing, aromatic molecules are present across the universe."

This approach of analyzing the aromatic infrared bands using the spectra of individual PAHs provides new, fundamental information about the UV-driven, spatial evolution of PAH subpopulations. It also ties these variations to changes in local conditions such as those due to the physical shape and history of the region, radiation field, and so on.

"Spitzer detected the PAH signature across the universe and showed PAHs were already forming only a couple of billion years after the Big Bang. Since PAHs are so sensitive to local conditions, analyzing the PAH bands as we did here represents a powerful new astronomical tool to trace the evolution of cosmic carbon and, at the same time, probe conditions across the universe," concluded Allamandola.

This work was supported by NASA's Carbon in the Galaxy Consortium under the auspices of the Astrophysics Research and Analysis Program.