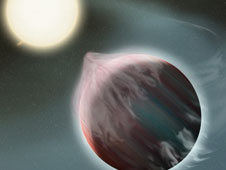 > View larger
An artist's depiction of an early stage in the destruction of a hot Jupiter by its star. Credit: NASA/GSFC/Frank Reddy Bad news for planet hunters: most of the "hot Jupiters" that astronomers have been searching for in star clusters were likely destroyed long ago by their stars. In a paper accepted for publication by the Astrophysical Journal, John Debes and Brian Jackson of NASA's Goddard Space Flight Center in Greenbelt, Md., offer this new explanation for why no transiting planets (planets that pass in front of their stars and temporarily block some of the light) have been found yet in star clusters. The researchers also predict that the planet hunting being done by the Kepler mission is more likely to succeed in younger star clusters than older ones.

"Planets are elusive creatures," says Jackson, a NASA Postdoctoral Program fellow at Goddard, "and we found another reason that they're elusive."

When astronomers began to search for planets in star-packed globular clusters about 10 years ago, they hoped to find many new worlds. One survey of the cluster called 47 Tucanae (47 Tuc), for example, was expected to find at least a dozen planets among the roughly 34,000 candidate stars. "They looked at so many stars, people thought for sure they would find some planets," says Debes, a NASA Postdoctoral Program fellow at Goddard. "But they didn't."

More than 450 exoplanets (short for "extrasolar planets," or planets outside our solar system) have been found, but "most of them have been detected around single stars," Debes notes.

"Globular clusters turn out to be rough neighborhoods for planets," explains Jackson, "because there are lots of stars around to beat up on them and not much for them to eat." The high density of stars in these clusters means that planets can be kicked out of their solar systems by nearby stars. In addition, the globular clusters surveyed so far have been rather poor in metals (elements heavier than hydrogen and helium), which are the raw materials for making planets; this is known as low metallicity.

Debes and Jackson propose that hot Jupiters—large planets that are at least 3 to 4 times closer to their host stars than Mercury is to our sun—are quickly destroyed. In these cramped orbits, the gravitational pull of the planet on the star can create a tide—that is, a bulge—on the star. As the planet orbits, the bulge on the star points a little bit behind the planet and essentially pulls against it; this drag reduces the energy of the planet's orbit, and the planet moves a little closer to the star. Then the bulge on the star gets bigger and saps even more energy from the planet's orbit. This continues for billions of years until the planet crashes into the star or is torn apart by the star's gravity, according to Jackson's model of tidal orbital decay.

"The last moments for these planets can be pretty dramatic, as their atmospheres are ripped away by their stars' gravity," says Jackson. "It has even been suggested recently the hot Jupiter called WASP-12B is close enough to its star that it is currently being destroyed."

Debes and Jackson modeled what would have happened in 47 Tuc if the tidal effect were unleashed on hot Jupiters. They recreated the range of masses and sizes of the stars in that cluster and simulated a likely arrangement of planets. Then they let the stars' tides go to work on the close-in planets. The model predicted that so many of these planets would be destroyed, the survey would come up empty-handed. "Our model shows that you don't need to consider metallicity to explain the survey results," says Debes, "though this and other effects will also reduce the number of planets."

Ron Gilliland, who is at the Space Telescope Science Institute in Baltimore and participated in the 47 Tuc survey, says, "This analysis of tidal interactions of planets and their host stars provides another potentially good explanation—in addition to the strong correlation between metallicity and the presence of planets—of why we failed to detect exoplanets in 47 Tuc."

The Kepler mission, which is searching for hot Jupiters and smaller, Earth-like planets, gives Debes and Jackson a good chance to test their model. Kepler will survey four open clusters—groups of stars that are not as dense as globular clusters—ranging from less than half a billion to nearly 8 billion years old, and all of the clusters have enough raw materials to form significant numbers of planets, Debes notes. If tidal orbital decay is occurring, Debes and Jackson predict, Kepler could find up to three times more Jupiter-sized planets in the youngest cluster than in the oldest one. (An exact number depends on the brightness of the stars, the planets' distance from the stars, and other conditions.)

"If we do find planets in those clusters with Kepler," says Gilliland, a Kepler co-investigator, "looking at the correlations with age and metallicity will be interesting for shaping our understanding of the formation of planets, as well as their continued existence after they are formed."

If the tidal orbital decay model proves right, Debes adds, planet hunting in clusters may become even harder. "The big, obvious planets may be gone, so we'll have to look for smaller, more distant planets," he explains. "That means we will have to look for a much longer time at large numbers of stars and use instruments that are sensitive enough to detect these fainter planets."

The Kepler mission is managed by NASA's Ames Research Center, Moffett Field, Calif., for the Science Mission Directorate at NASA Headquarters in Washington.