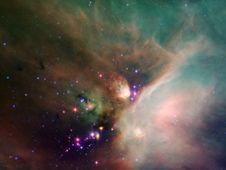 Image of newborn stars from NASA's Spitzer Space Telescope. Credit: NASA NASA is pleased to receive the National Research Council's Astro2010 report, New Worlds, New Horizons in Astronomy and Astrophysics*. We appreciate the science community's efforts in defining a set of compelling science objectives for space-based astrophysical research for the coming decade, and for carefully considering the cost of the initiatives the report recommends.

We look forward to assessing the report's findings and recommendations for strengthening the nation's world-class space astrophysics program. From new worlds to new physics, the coming decade of discovery leverages not only our current space observatories – such as the Hubble, Spitzer, Chandra and Fermi space telescopes – but also our planned facilities – especially those from previous decadal surveys, the James Webb Space Telescope and the Stratospheric Observatory for Infrared Astronomy (SOFIA). The survey calls for new facilities that expand our reach into the cosmos that will include opportunities for coordination and cooperation with other Federal agencies and international partners.

There are exciting times ahead and NASA is proud to be a part of it.

*Note: The Astro2010 report is now available in pre-publication form via the National Academies Press website (the fully edited final publication version of the report will emerge later in the year).
› More Information→
› Back To Top