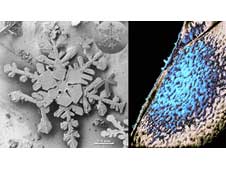 › Larger image
The familiar forms of ice, including snowflakes (left), are built from crystals, but amorphous ice (right) is unstructured. Credits: NASA/Earth Observatory (left image) and NASA/ARC/P. Jenniskens and D.F. Blake (right image) This isn't the ice of snowflakes or ice cubes. No, this ice needs such intense cold and low pressure to form that the right conditions rarely, if ever, occur naturally on Earth. And when Gerakines makes the ice, he must keep the layer so microscopically thin it is dwarfed by a grain of pollen.

These ultrathin layers turn out to be perfect for recreating some of the key chemistry that takes place in space. In these tiny test tubes, Gerakines and his colleagues in the Cosmic Ice Lab at NASA's Goddard Space Flight Center in Greenbelt, Md., can reproduce reactions in ice from almost any time and place in the history of the solar system, including some that might help explain the origin of life.

"This is not the chemistry people remember from high school," says Reggie Hudson, who heads the Cosmic Ice Lab. "This is chemistry in the extreme: bitter cold, harsh radiation and nearly non-existent pressure. And it's usually taking place in gases or solids, because generally speaking, there aren't liquids in interstellar space."


NASA scientists at the Goddard Cosmic Ice Lab are studying a kind of chemistry almost never found on Earth. The extreme cold, hard vacuum, and high radiation environment of space allows the formation of an unstructured form of solid water called amorphous ice. Often particles and organic compounds are trapped in this ice that could provide clues to life in the universe. Credit: NASA

The Cosmic Ice Lab is one of a few laboratories worldwide where researchers have been studying the ultracool chemistry of cosmic ice. With its powerful particle accelerator, the Goddard lab has the special ability to mimic almost any kind of solar or cosmic radiation to drive these reactions. And that lets them dig deep to study the chemistry of ice below the surface of planets and moons as well as ice in space. 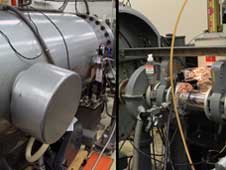 › Larger image
To simulate damage from solar wind particles and cosmic rays, scientists in Goddard’s Cosmic Ice Lab irradiate ice with this Van de Graaff accelerator. High voltage builds up in the 10-foot-long tube (left), culminating in the beam source (right) at the far end. Credit: NASA In a vacuum chamber about the size of a lunchbox, Gerakines recreates a little patch of deep space, in all its extremes. He pumps out air until the pressure inside drops to a level a billion times lower than normal for Earth, then chills the chamber to minus 433 degrees Fahrenheit (15 kelvins). To get ice, all that remains is to open a valve and let in water vapor.

The instant the sprightly vapor molecules enter the chamber they are literally frozen in their tracks. Still pointing every which way, the molecules are transformed immediately from their gaseous state into the disorderly solid called amorphous ice. Amorphous ice is exactly the opposite of the typical ice on Earth, which forms perfect crystals like those that make up snowflakes or frost needles. These crystals are so orderly and predictable that this ice is considered a mineral, complete with a rating of 2.5 on the Mohs scale of hardness—the same rating as a fingernail.

Though almost unheard of on Earth, amorphous ice is so widespread in interstellar space that it could be the most common form of water in the universe. Left over from the age when the solar system was born, it is scattered across vast distances, often as particles no bigger than grains of dust. It's also been spotted in comets and icy moons.

The secret to making amorphous ice in the lab, Gerakines finds, is to limit the layer to a depth of about half a micrometer—thinner than a strand of spider's silk.

"Water is such a good insulator that if the ice gets too thick, only the bottom of the sample, closer to the cooling source, will stay sufficiently cold," says Gerakines. "The ice on top will get warm enough to crystallize."

The superthin ice can be spiked with all kinds of interesting chemicals found in space. One set of chemicals that Gerakines works with is amino acids, which are key players in the chemistry of life on Earth. Researchers have spent decades identifying a whole smorgasbord of amino acids in meteorites (including some involved in life), as well as one found in a sample taken from a comet.

"And because water is the dominant form of frozen material in the interstellar medium and outer solar system," says Gerakines, "any amino acids out there are probably in contact with water at some point."

For his current set of experiments, Gerakines makes three kinds of ice, each spiked with an amorphous form of an amino acid (either glycine, alanine or phenylalanine) that is found in proteins. 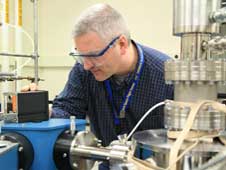 Earlier studies by other researchers have looked at ice chemistry using ultraviolet light. Gerakines opts instead to look at cosmic radiation, which can reach ice hidden below the surface of a planet or moon. To mimic this radiation, he uses a proton beam from the high-voltage particle accelerator, which resides in an underground room lined with immense concrete walls for safety.

With the proton beam, a million years' worth of damage can be reproduced in just half an hour. And by adjusting the radiation dose, Gerakines can treat the ice as if it were lying exposed or buried at different depths of soil in comets or icy moons and planets.

He tests the three kinds of water-plus-amino-acid ice and compares them to ice made from amino acids only. Between blasts, he checks the samples using a "molecular fingerprinting" technique called spectroscopy to see if the amino acids are breaking down and chemical by-products are forming.

As expected, more and more of the amino acids break down as the radiation dose adds up. But Gerakines notices that the amino acids last longer if the ice includes water than if they are left on their own. This is odd, because when water breaks down, one of the fragments it leaves behind is hydroxyl (OH), a chemical well-known for attacking other compounds.

The spectroscopy confirms that some OH is being produced. But overall, says Gerakines, "the water is essentially acting like a radiation shield, probably absorbing a lot of the energy, the same way a layer of rock or soil would."

When he repeats the experiments at two higher temperatures, he is surprised to find the acids fare even better. From these preliminary measurements, he and Hudson calculate how long amino acids could remain intact in icy environments over a range of temperatures.

"We find that some amino acids could survive tens to hundreds of millions of years in ice near the surface of Pluto or Mars and buried at least a centimeter [less than half an inch] deep in places like the comets of the outer solar system," says Gerakines. "For a place that gets heavy radiation, like Europa, they would need to be buried a few feet." (These findings were reported in the journal Icarus in August 2012.)

"The good news for exploration missions," says Hudson, "is it looks as if these amino acids are actually more stable than anybody realized at temperatures typical of places like Pluto, Europa and even Mars."

The Cosmic Ice Lab is part of the Astrochemistry Laboratory in Goddard's Solar System Exploration Division and is funded in part by the Goddard Center for Astrobiology and the NASA Astrobiology Institute.