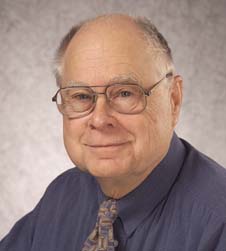 Kepler mission Principal Investigator William Borucki.
>Larger Image William Borucki’s interest in space exploration began early, when he and his boyhood friends would launch homemade rockets into the skies of Delavan, a small town in the farmlands of Wisconsin. The local sheriff would close the road so they wouldn’t endanger others. "Out where we lived," he says, "the worst thing that could happen is that the rocket might hit a cow on the way down."

Borucki is now the science principal investigator of the Kepler mission, which promises to bring us closer than ever to answering the eternal question, "Are we alone?" It’s a project that is the culmination of decades of vision, perseverance, and a dedication to solving what Borucki calls "the big problems."

Out of college, Borucki took his first job at the only place he bothered to apply –- NASA. "I wanted to be exploring space," he says. At NASA Ames Research Center in California, he began his career by helping develop heat shields for the Apollo moon missions.

By the early 1980s, though, the young scientist was developing an interest in a new and very obscure field -– exoplanet exploration. Inspired by workshops he had attended at Ames and by a paper he had read speculating about the existence and detection of planets orbiting other stars, Borucki published his first paper detailing how to find exoplanets using photometry –- the principle that the Kepler mission would use some 25 years later.

Borucki’s ideas were groundbreaking, but his paper was met with much skepticism in the scientific community. "People pooh-poohed the idea," he says. "They said that there was no technique for making these kinds of observations." At the time, the idea of finding other solar systems was thought to border on science fiction.

Still, he was undaunted. "I wanted to spend my time answering big questions and doing something I felt was important," he explains. "Finding extrasolar planets was a huge problem to figure out, and solving huge problems can have huge payoffs." 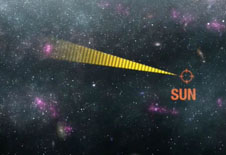 A diagram of where in the galaxy the Kepler mission will search for extrasolar planets.
>Larger Image Showing that his mission concept was worthy of funding proved to be a tough task. "It was a foregone conclusion that proposals to find exoplanets would just be thrown away," he says. "People thought that there was no way it could be done; no one had ever done automated photometry before."

Over the course of the 1990s, however, Borucki and his team were able to prove their case. They showed that automated photometry could be accomplished by developing a ground-based photometer that could monitor 10,000 stars simultaneously at the Lick Observatory in California, and they developed a highly precise laboratory simulator that demonstrated the 20 parts per million photometric precision required to detect Earth-size planets.

Finally, in 2001, NASA selected his team’s mission design from a pool of competing proposals. The Kepler spacecraft has arrived on the launch pad -- the fruition of the ideas and technology Borucki described in his first exoplanet paper 25 years ago.

Borucki is hopeful that, once Kepler begins its observations, the resulting data will help astronomers better understand our place in the universe. "The data from Kepler will have a major impact, especially if we find lots of planets like ours orbiting in the habitable zones of their stars," he said. "Then we’ll know its likely that we aren’t alone, and that someday we might be able to join other intelligent life in the universe."

Kepler will also help guide future missions to find Earth-like planets. "Kepler is a stepping stone," says Borucki. "Depending on the prevalence of Earth-like planets, successor missions might be able to analyze a planet’s composition and atmosphere, and eventually we might make the decision to send a probe to a promising exoplanet."

As a scientist and problem-solver, Borucki seems more interested in seeing the data from the mission than reflecting on the long, arduous journey of making Kepler a reality. Still, he has some advice for others chasing the answers to their own dreams: "Be patient, persistent, and spend your time doing something worthwhile," he says.

Written by Joshua Rodriguez/PlanetQuest
› Back To Top