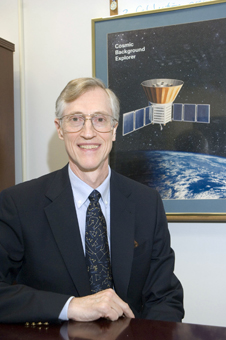 Dr. John C. Mather is a Senior Astrophysicist in the Observational Cosmology Laboratory at NASA's Goddard Space Flight Center. Credit: NASA
> Larger image Dr. John Mather, a Nobel Prize-winning astrophysicist at NASA's Goddard Space Flight Center in Greenbelt, Md. joined the Blueshift podcast on June 18th to share his sense of what makes scientific data beautiful. "I think it's worth a lot of attention to portraying the information in the best possible graphic way," he said. "Data are beautiful when they tell a story."

"Blueshift's summer series kicks off with Dr. Mather's interview," said Sara Mitchell, Director of Blueshift."This four part series will follow the stories of missions, scientists, and iconic images as we see how science data is captured and communicated." Podcast listeners will find additional material and images related to each show on the Blueshift web site.

In the episode, John Mather describes how science and data are communicated -- and the absolute importance of imagery to share data so the world can understand it. In 2006, both he and George Smoot at the University of California, Berkeley, Calif., shared the Nobel Prize in Physics. They won for their work on NASA's Cosmic Background Explorer, a satellite that mapped radiation emitted when the universe was less than 400,000 years. The mission created the first-ever "baby picture" of the cosmos.

If you think that satellites just relay the images that we see here on Earth, you'll be in for a big surprise. Dr. Mather discusses how data are assembled, polished and transformed into images, animations and illustrations.

Mather also describes how the new James Webb Space Telescope, slated for launch in 2014, will build upon the valuable science and breathtaking imagery of Hubble. Webb will see the most distant objects in the cosmos and take astrophysicists further back in time than ever before!

The term "blueshift" relates to a change in the spectrum of an object that is moving toward us. "We chose Blueshift because we aim to bring the universe of astrophysics at Goddard directly to our listeners," Mitchell said.

To learn more about Blueshift, subscribe to the podcast or listen to archived episodes, please visit: