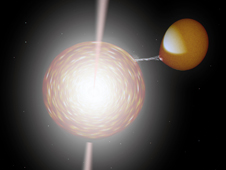 GX 339-4, illustrated here, is a typical microquasar. A black hole orbits an evolved star, which donates matter to it. How the black hole manages to eject some of this gas in tight jets remains unknown.
Credit: ESO/Poshak Gandhi
> Larger image
Observations of two different systems -- both containing stellar-mass black holes -- are showing astronomers how much they have yet to learn. Coordinated observations of these systems using the European Southern Observatory's Very Large Telescope and NASA's Rossi X-ray Timing Explorer reveal surprising dips in optical brightness moments before high-energy flares erupt.

The systems are Swift J1753.5-0127 -- discovered by NASA's Swift satellite -- and GX 339-4. In them, a black hole and a normal star orbit a few million miles apart. That's less than 10 percent of the distance between Mercury and our sun.

Because the normal stars in these systems have evolved into bloated giants, a stream of matter spills toward the black hole and forms a disk of hot gas around it. As matter collides in this so-called accretion disk, it heats up to millions of degrees. Near the black hole, intense magnetic fields in the disk accelerate material into tight jets that flow in opposite directions away from the hole.

If that sounds familiar, it should. A similar process occurs in active galaxies and quasars, where black holes weighing millions of suns gobble up matter. Jets from active galaxies may extend tens of thousands of light-years. Because the process is thought to be the same despite the black hole's size, astronomers class systems like Swift J1753.5-0127 and GX 339-4 as "microquasars."

Astronomers don't fully understand how black holes create these jets, so they study nearby microquasars for a detailed look at the process in miniature. "Microquasars are not only closer, but they change more rapidly," says Richard Mushotzky at NASA's Goddard Space Flight Center in Greenbelt, Md. "Changes that may take a year to see in a quasar occur in these systems over a minute or less."

"The orbital period of Swift J1753.5-0127 -- just 3.2 hours -- is the fastest found for a likely black hole," says team member Martin Durant at the Institute of Astrophysics of the Canary Islands. The orbital period of GX 339-4, by contrast, is about 1.7 days. "Yet the two systems are similar in their X-ray properties," he notes.

Astronomers had thought that the cooler visible-light emission comes from so far out in a black hole's accretion disk that it reflects little of the main action. "We were wrong, and these systems prove it," Durant says. "The optical and X-ray emissions are intrinsically linked, probably by the same immense magnetic fields that can hurl material into light-years-long jets." 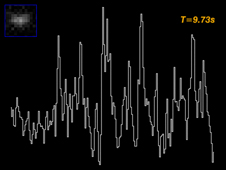 This animation shows the rapid light variations of GX 339-4 as detected by ULTRACAM on the ESO's Very Large Telescope. The inset shows the actual image of the system.
Credit: ESO
> Watch GIF animation To study the systems, an international team led by Poshak Gandhi of Japan's RIKEN Institute of Physical and Chemical Research watched them simultaneously using two different instruments, one on the ground and one in space. A high-speed camera called ULTRACAM on the European Southern Observatory's Very Large telescope captured visible light changes. ULTRACAM recorded up to 20 images a second.

NASA's Rossi X-ray Timing Explorer captured the X-ray variations. The satellite can record changes in X-ray output that occur in millionths of a second. "Being able to take readings at high speed and coordinate between NASA's satellite and the ESO's biggest telescopes gives us a unique opportunity to seeing what's going on in the systems," Durant says.

The data show that the light output typically drops just before the X-ray output undergoes a large spike, which mean the two emissions are strongly connected. "The rapid variations in the X-ray and visible light output must have some common origin, and one very close to the black hole itself," Gandhi concludes. "The cool thing about discovering such patterns that stand out amidst chaotic fluctuations of light is that they give us a new handle on understanding the underlying physics."

“Strong magnetic fields represent the best candidate for the dominant physical process,” says team member Jon Miller at the University of Michigan. Magnetic fields can soak up energy liberated close to the black hole and store it. This energy is released either as multi-million-degree, X-ray-emitting gas or as streams of charged particles traveling near the speed of light. How the black holes divide the energy between these two forms determines the characteristic pattern of X-ray and optical changes astronomers observe.

"These kinds of studies are mapping the accretion disks around black holes," says Mushotzky. "Right now, astronomers aren't sure what's happening where."