A picture of the closest star system -- Alpha Centauri. Two of the three stars, Alpha Centauri A and B, are illustrated with circles. Proxima Centauri, the third star in the system, is not visible in this picture. (Image Credit: ESO)
>Larger Image

The search for another planet like our own has led astronomers to probe solar systems hundreds of light-years from our own. One group of scientists, though, is hoping to find an Earthlike planet in our own backyard.

At a little over 4 light-years from Earth, the sunlike star Alpha Centauri B -- actually a member of a three-star system -- is our sun's closest neighbor and practically a stone's throw away in celestial terms.

So when Javiera Guedes, a graduate student at the University of California, Santa Cruz, heard about a proposed project to search for Earthlike planets around Alpha Centauri B, she knew "I had to jump on it."

Her professor, Greg Laughlin, had initially explored the idea in a series of blog posts on http://oklo.org, saying, "I'm willing to bet a hundred dollars" that there is at least one planet orbiting the star, and that "these planets are reasonably close (or inside) the habitable zones." The habitable zone is the area around a star where the temperature is just right to support life as we know it.

Guedes headed up a NASA-funded project to analyze the possibility of detecting an Earthlike planet in orbit around Alpha Centauri B, and their findings were positive. 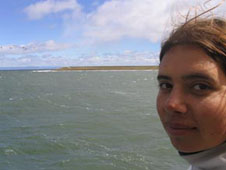 "It's so close to us, and the position of the other stars is such that it should be very possible to find a small planet," she explained. She also found that, based on astronomers' current understanding of how solar systems form, the existence of a planet the size of our own is very likely, and that there's also a chance that it would lie in the habitable zone.

Now, Laughlin's planet-hunting team is using a telescope in Chile to keep an eye on the star for the next three years, in order to collect enough data to determine whether or not the next Earthlike planet lies next door.

Such a planet would be too small to see, but its gravity will pull on its host star, making it rock back and forth in a way that the telescope can detect. With NASA funding, they're also working on simulations that may be able to predict how a solar system could have formed around our cosmic neighbor.

Guedes is hopeful for the results of the study. "I'm in this to the end," she said. "Finding a planet like our own this close could change everything."

The 1.5-meter CTIO telescope in Chile that the Alpha Centauri team is using to make their observations. (Credit: NOAO/AURA/NSF)
>Larger Image


For more information about exoplanet discoveries and technology, visit PlanetQuest.

Written by Joshua Rodriguez/PlanetQuest
› Back To Top