For Planet Hunter Rachel Akeson, Science Is in the Genes 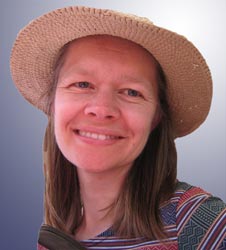 You could say that science runs in Rachel Akeson's family. The daughter of two scientists, she knew she was going to be an astronomer by the time she was a third-grader. Now, in addition to having her hands full with her own young children, Akeson is studying young stars as they develop their own planetary families.

PlanetQuest: What's your role with the Keck Interferometer project?

Rachel Akeson: I'm the project scientist for both the Michelson Science Center at Caltech and for the Keck Interferometer. I try to look after the big science goals for the interferometer, I make sure the decisions about technology and operations will still allow the interferometer to perform then needed operations and try to help the scientists who use the telescope for their studies.

Akeson: With an interferometer, the idea is to use multiple telescopes to get the resolution of a bigger telescope. You take the light from different telescopes, combine it in a special way, like we do with the two Keck Observatory telescopes on Mauna Kea. Right, now, we're gearing up for an intensive, yearlong study of dust around nearby stars.

PQ: Why look at the dust around stars?

Akeson: Studying the dust can tell us which stars are good exoplanet candidates. That helps us design other planet-finding missions and can help those missions be more efficient by picking which stars are more likely to have planets.

PQ: How do you get a good look at the dust? 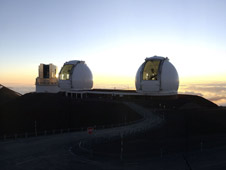 The Keck Interferometer, with the telescopes' doors open to equalize temperature inside and outside of the domes. Image credit: NASA/JPL
›  Larger view

PQ: How did you get involved with this mission?

Akeson: Well, my parents were both scientists, and I wanted to be an astronomer since third grade. I got a degree in physics from the University of Iowa, got my doctorate at Caltech, then went to the University of California at Berkeley before coming back to Caltech in 1998. I started working at the science center for the SIM PlanetQuest mission and eventually found myself working on the Keck project.

PQ: What's your favorite thing about your current project?

Akeson: My favorite part is that we built something that's actually really useful - and that I get to use the telescope myself. I do my own thesis project research on the side. I study young stars.

Akeson: As the gas and dust that makes up starsin an interstellar cloud collapses and begins to form the a star, there's a disk of material that surrounds the star - this is where planets are made. I study the zone around a star where a habitable planet could form, and I look at that matter that's there, how much of it there is, how warm it is, and how long it will stay around. You can get an idea of how much time there is for a planet to form before the disc disappears. It's something that I've been looking at for 15 years now.

PQ: What do you like to do with your time when you aren't studying the heavens?

Akeson: I love to hike and spend time with my kids - one is almost two, and the other is five years old. We go to the zoo or Huntington Gardens a lot.

PQ: What's your advice to anyone else who's interesteding in being a part of this field?

Akeson: There are all kinds of people working in this area, so you shouldn't get scared off if math isn't your thing. There are lots of different careers, from science journalism to public outreach, that people can be a part of.

Akeson: For me, it's the idea that the laws of physics apply to everything, even to things in space. Everything in space is so extreme. Things are going on out there that we'd never see on Earth.

JPL, a division of the California Institute of Technology in Pasadena, manages the Keck Interferometer for NASA. For more about NASA's search for new worlds, visit the PlanetQuest Web site at http://planetquest.jpl.nasa.gov.