Grow Text SizeShrink Text Size
NASA Chandra, Spitzer Study Suggests Black Holes Abundant Among The Earliest Stars
By comparing infrared and X-ray background signals across the same stretch of sky, an international team of astronomers has discovered evidence of a significant number of black holes that accompanied the first stars in the universe.

Using data from NASA's Chandra X-ray Observatory and NASA's Spitzer Space Telescope, which observes in the infrared, researchers have concluded one of every five sources contributing to the infrared signal is a black hole. 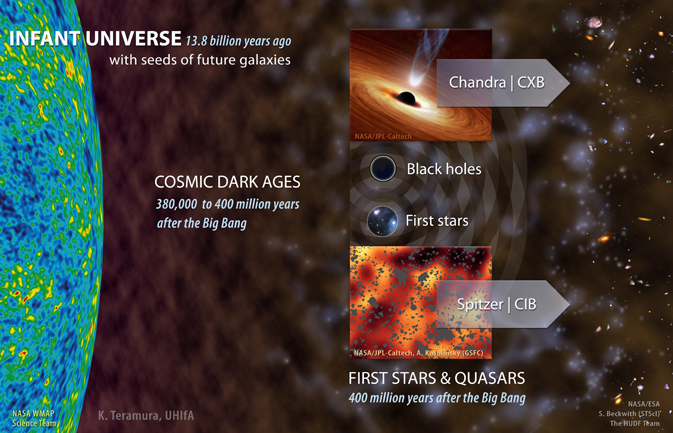 The cosmic microwave background, shown at left in this illustration, is a flash of light that occurred when the young universe cooled enough for electrons and protons to form the first atoms. It contains slight temperature fluctuations that correspond to regions of slightly different densities, representing the seeds of all cosmic structure we see around us today. The universe then went dark for hundreds of millions of years until the first stars shone and the first black holes began accreting gas. A portion of the infrared and X-ray signals from these sources is preserved in the cosmic infrared background, or CIB, and its X-ray equivalent, the CXB. At least 20 percent of the structure in these backgrounds changes in concert, indicating that black hole activity was hundreds of times more intense in the early universe than it is today.
Credit: Karen Teramura, UHIfA
› Larger image
› Larger image (unlabeled)
"Our results indicate black holes are responsible for at least 20 percent of the cosmic infrared background, which indicates intense activity from black holes feeding on gas during the epoch of the first stars," said Alexander Kashlinsky, an astrophysicist at NASA's Goddard Space Flight Center in Greenbelt, Md.

The cosmic infrared background (CIB) is the collective light from an epoch when structure first emerged in the universe. Astronomers think it arose from clusters of massive suns in the universe's first stellar generations, as well as black holes, which produce vast amounts of energy as they accumulate gas.

Even the most powerful telescopes cannot see the most distant stars and black holes as individual sources. But their combined glow, traveling across billions of light-years, allows astronomers to begin deciphering the relative contributions of the first generation of stars and black holes in the young cosmos. This was at a time when dwarf galaxies assembled, merged and grew into majestic objects like our own Milky Way galaxy.

"We wanted to understand the nature of the sources in this era in more detail, so I suggested examining Chandra data to explore the possibility of X-ray emission associated with the lumpy glow of the CIB," said Guenther Hasinger, director of the Institute for Astronomy at the University of Hawaii in Honolulu, and a member of the study team.

Hasinger discussed the findings Tuesday at the 222nd meeting of the American Astronomical Society in Indianapolis. A paper describing the study was published in the May 20 issue of The Astrophysical Journal.

The work began in 2005, when Kashlinsky and his colleagues studying Spitzer observations first saw hints of a remnant glow. The glow became more obvious in further Spitzer studies by the same team in 2007 and 2012. The 2012 investigation examined a region known as the Extended Groth Strip, a single well-studied slice of sky in the constellation Bootes. In all cases, when the scientists carefully subtracted all known stars and galaxies from the data, what remained was a faint, irregular glow. There is no direct evidence this glow is extremely distant, but telltale characteristics lead researchers to conclude it represents the CIB.

In 2007, Chandra took especially deep exposures of the Extended Groth Strip as part of a multiwavelength survey. Along a strip of sky slightly larger than the full moon, the deepest Chandra observations overlap with the deepest Spitzer observations. Using Chandra observations, lead researcher Nico Cappelluti, an astronomer with the National Institute of Astrophysics in Bologna, Italy, produced X-ray maps with all of the known sources removed in three wavelength bands. The result, paralleling the Spitzer studies, was a faint, diffuse X-ray glow that constitutes the cosmic X-ray background (CXB).

Comparing these maps allowed the team to determine whether the irregularities of both backgrounds fluctuated independently or in concert. Their detailed study indicates fluctuations at the lowest X-ray energies are consistent with those in the infrared maps.

"This measurement took us some five years to complete and the results came as a great surprise to us," said Cappelluti, who also is affiliated with the University of Maryland, Baltimore County in Baltimore.

The process is similar to standing in Los Angeles while looking for signs of fireworks in New York. The individual pyrotechnics would be too faint to see, but removing all intervening light sources would allow the detection of some unresolved light. Detecting smoke would strengthen the conclusion at least part of this signal came from fireworks.

In the case of the CIB and CXB maps, portions of both infrared and X-ray light seem to come from the same regions of the sky. The team reports black holes are the only plausible sources that can produce both energies at the intensities required. Regular star-forming galaxies, even those that vigorously form stars, cannot do this.

By teasing out additional information from this background light, the astronomers are providing the first census of sources at the dawn of structure in the universe.

"This is an exciting and surprising result that may provide a first look into the era of initial galaxy formation in the universe," said another contributor to the study, Harvey Moseley, a senior astrophysicist at Goddard. "It is essential that we continue this work and confirm it."

NASA's Marshall Space Flight Center in Huntsville, Ala., manages the Chandra program for the agency's Science Mission Directorate in Washington. The Smithsonian Astrophysical Observatory controls Chandra's science and flight operations from Cambridge, Mass. Data are archived at the Chandra X-ray Center in Cambridge.