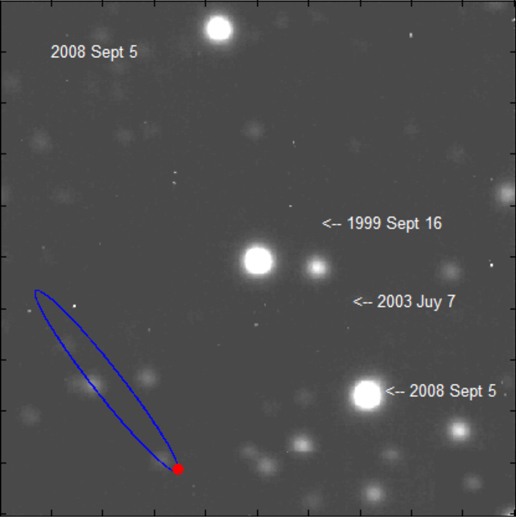 This movie shows the star VB 10 moving across the sky over a period of nine years. Astronomers nabbed a planet circling this star using a method called astrometry -- the first successful application of the method to planet hunting.

The planet, called VB 10b, tugs on the star, causing it to wobble back and forth -- but you can't see the planet or the wobble in the movie. You can see what is called proper motion.

Proper motion reflects the star's velocity. All stars move around in space at different speeds, including our sun. The closer a star is to us, the more it will appear to move relative to stars that are farther away (to picture this, think about a car speeding by in front of you and very far from you -- its motion is less obvious when viewed from far away).

In the astrometry planet-hunting technique, researchers attempt to measure very tiny wobbles in stars -- the result of planets yanking them around. The method requires precise observations of a star's position on the sky. But to do this, the star's proper motion, and a cyclic "parallax" motion caused by Earth's changing vantage point as it orbits the sun, must be measured and subtracted.

This was done for the VB 10 star to identify its orbiting planet. Measurements were made of the star's position over a period of about 9 years. While the proper motion causes the star to move 1.5 arcseconds per year, the parallax motion (not seen in this movie) induces a movement of 1/6th an arcsecond per year (about 1/12th the size of the star images). The planet-induced wobble is responsible for moving the star just 6/1000ths of an arcsecond -- a motion so tiny that it took a special JPL-built astrometry instrument and a five-meter telescope at the Palomar Observatory to see. (An arcsecond is 1/3600th of a degree across the sky.)

The blue line in the movie shows a magnified picture of the orbit of the VB 10 planet, represented in red. The motion shown for this orbit is accurately timed to correspond to the time in the actual images making up the movie.

The California Institute of Technology and NASA's Jet Propulsion Laboratory, both in Pasadena, are partners in the Palomar Observatory, near San Diego, Calif.

› View this video
› Back To Top