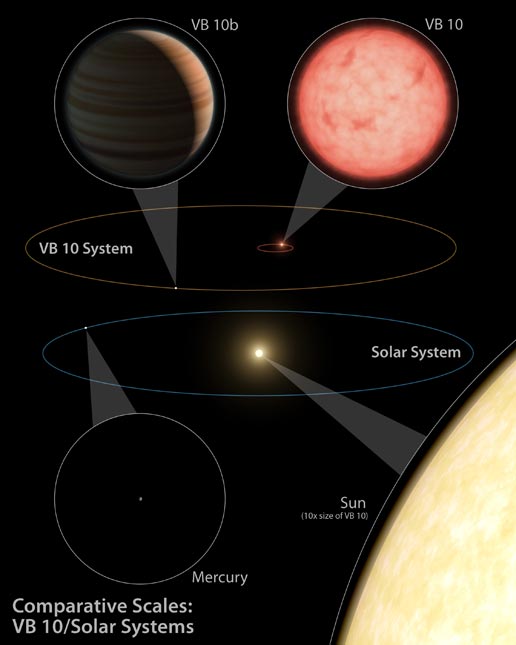 This artist's diagram compares our solar system (below) to the VB 10 star system. Astronomers successfully used the astrometry planet-hunting method for the first time to discover a gas planet, called VB 10b, around a very tiny star, VB 10. All of the bodies in this diagram are shown in circular insets at the same relative scales.

The VB 10 star is one of the smallest known -- and holds the record for the smallest known to host a planet. It's a dim, red M-dwarf with only one-tenth the size, and one-twelfth the mass, of our sun. Its planet, on the other hand, is quite hefty, with six times the mass of Jupiter. Though the planet is less massive than the star, the two orbs would be about the same size.

The VB 10 system is essentially a shrunken version of our solar system. Even though its planet is at a similar distance from its star as Mercury is from our sun, it wouldn't receive as much heat and would be classified as a "cold Jupiter" similar to our own. If any rocky planets do orbit in the VB 10 system, they would be located even closer in than VB 10b, and could lie within the star's habitable zone -- a region where temperatures are right for water to be liquid.

Astrometry involves measuring the wobble of a star on the sky, caused by an unseen planet yanking it back and forth. Because the VB 10b planet is so big relative to its star, it really tugs the star around. The red circle seen at the center of the VB 10 system shows just how big this wobble is. Because our sun is more massive than VB 10, its planets do not cause it to wobble nearly as much.