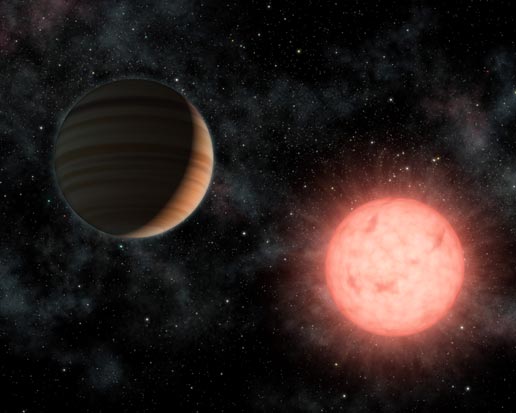 This artist's concept shows the smallest star known to host a planet. The planet, called VB 10b, was discovered using astrometry, a method in which the wobble induced by a planet on its star is measured precisely on the sky.

The dim, red star, called VB 10, is a so-called M-dwarf, located 20 light-years away in the constellation Aquila. It has only one-twelfth the mass, and one-tenth the size, of our sun. The planet is a gas giant similar in size to Jupiter but with six times the mass. Though the planet is less massive than its star, the two orbs would have a similar diameter.

VB 10b orbits its star about every 9 months at a distance of 50 million kilometers (30 million miles).