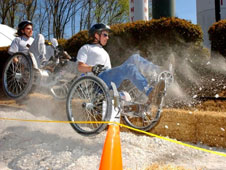 A student team competes in NASA's Great Moonbuggy Race. (NASA/MSFC)
View large image Approximately 100 returning and rookie teams from around the world will compete for a top-three finish at the 19th-annual NASA Great Moonbuggy Race, April 13-14, at the U.S. Space & Rocket Center in Huntsville.

Get the race results!

Students begin preparing for the event each year during the fall semester. They must design, build and test a sturdy, collapsible, lightweight vehicle that addresses engineering challenges similar to those resolved and overcome by the original Apollo-era lunar rover development team in the late 1960s at NASA's Marshall Space Flight Center in Huntsville.

"The annual NASA Great Moonbuggy Race is a unique and exciting way to get high school and college students involved in hands-on robotic design and operation," said Leland Melvin, NASA associate administrator for education. "They are working on a solution to a real exploration challenge faced by Apollo mission engineers in the 1960s. Today's student designers could be the engineers and robotics experts who will design a rover for future human exploration of Mars."


The buggies are based on the design of those classic rovers, which American astronauts drove across the moon's surface during the Apollo 15, 16 and 17 missions in the early 1970s. Teams of students build their vehicles using trail bike tires, aluminum or composite-metal struts and parts.

Moonbuggy entries are expected to mimic a "proof-of-concept" or engineering test model, rather than a final production model. Each student team of six members is responsible for building its own buggy. Each moonbuggy is human-powered by two students from the team -- one female and one male -- over a half-mile simulated lunar terrain course that includes craters, rocks, lava, ridges, inclines and soil.

As a part of the competition, and prior to course testing, the unassembled moonbuggy entries must be carried to the course starting line with the unassembled components contained in a box that is 4 feet long, 4 feet wide and 4 feet high -- dimensions similar to those required for the original Lunar Roving Vehicle. At the starting line, the buggies will be assembled and readied for course testing and evaluated for safety. Assembly occurs one time prior to the first course run.


Top prizes are awarded to the three teams in both the high school and college/university divisions that post the fastest race times, which include assembly and penalty times.

A variety of other prizes are given by race corporate sponsors. These include "Rookie of the Year" and the "American Institute of Aeronautics and Astronautics Telemetry/Electronics Award" awards. The latter is a new award for this year's competition and will go to the team that develops and operates the most innovative and useful real-time telemetry system at the race.

The NASA Great Moonbuggy Race is one of many educational projects and initiatives the agency conducts each year to attract and engage America's next generation of scientists, engineers and explorers.

For more information about the competition, visit: