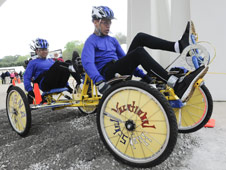 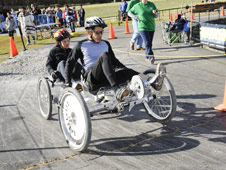 For the second time in two years, racers from the University of Puerto Rico in Humacao won first place in the college division. (NASA/MSFC) 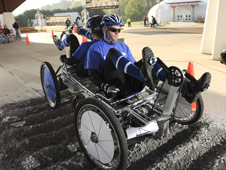 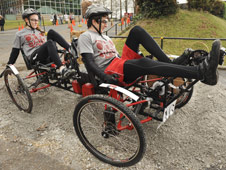 Student racers from the Ohio State University in Columbus tied for third place in the college division. (NASA/MSFC) 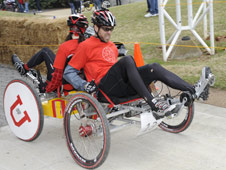 Student racers from the University of Utah in Salt Lake City tied for third place in the college division. (NASA.MSFC)
View large photos
View race photos on Flickr
NASA has announced the winners of the 18th annual NASA Great Moonbuggy Race -- and it's Puerto Rico's year.

Teams representing Teodoro Aguilar Mora Vocational High School of Yabucoa, Puerto Rico, snared the top two berths in the high school division; and, for the second straight year, the University of Puerto Rico in Humacao held off all comers to win the college division.

The NASA competition challenges students around the world to build and race lightweight, human-powered buggies -- demonstrating the same innovation and can-do spirit that put the first Apollo-era lunar rover on the moon four decades ago. More than 70 teams from 22 states, Puerto Rico, Canada, Germany, India and Russia took part in the race, which encourages young people to reach for new heights in science, technology, engineering and math, and pursue careers in technical fields that will benefit NASA, the nation and all humankind.

Held April 1-2 at the U.S. Space & Rocket Center in Huntsville, the event is organized by NASA's Marshall Space Flight Center in Huntsville. It challenges students to tackle many of the same engineering challenges dealt with by Apollo-era lunar rover developers at the Marshall Center in the late 1960s. This year's event celebrated the 40th anniversary of that feat, which culminated in the first use of a crewed lunar rover in July 1971.

The winning teams posted the fastest combined vehicle assembly and race times in their divisions and received the fewest on-course penalties.

Teodoro Aguilar Mora Vocational High School first raced in the event in 2010, earning course times that put their twin buggies in a respectable but trophy-less 7th and 9th place among all high school teams. This year, Team II posted a final time of 3 minutes 18 seconds -- just one second over the all-time record on the modern Great Moonbuggy Race course. Team I was close behind, delivering a final time of 3 minutes 24 seconds.

Teodoro Aguilar Mora racer Isadora Matta also received an award of special recognition for walking away, bruised and scraped but unbowed, from one of the race weekend's most memorable crashes.

The University of Puerto Rico in Humacao, the only school in the world to enter a moonbuggy in every race since the event was founded in 1994, rolled to victory in 2010 with a winning time of 4 minutes 18 seconds. This year, the team crushed that previous best, completing the roughly half-mile course -- craters, pits, gravel mounds and other obstacles simulating lunar surface conditions -- in 3 minutes 41 seconds.

Finishing in third place in the high school division was Jupiter High School Team II of Jupiter, Fla. The Jupiter team, new to the race in 2010, tied for third place that year with perennial race contenders from the Huntsville Center for Technology.

Race organizers presented both first-place winners with trophies depicting NASA's original lunar rover, and each received a cash prize of $2,850. The high school division award is provided by ATK Aerospace Systems of Salt Lake City, Utah, and Jacobs ESTS Group of Huntsville. The college award is provided by Lockheed Martin Corporation of Huntsville.

"We're thrilled to commemorate the 40th anniversary of the first lunar rover on the moon with the biggest moonbuggy race to date," said Tammy Rowan, manager of the Marshall Center's Academic Affairs Office, which organizes the race. "The legacy of that marvelous NASA endeavor is alive and well in classrooms all over the nation and the world, where it's clear our young people dream as big as NASA does, and possess the creativity, know-how and innovation to realize those dreams. When today's racers become tomorrow's engineers and scientists, I'm confident the next era of space exploration and discovery will be in very good hands."

Participation in the race has increased annually from just eight college teams in 1994 -- the high school division was added two years later -- to this year's record-breaking numbers. Interest in the race has swelled as well. This year, thousands of people around the world watched live moonbuggy racing on the webcasting service UStream. To watch archived race coverage, visit:


The Academic Affairs Office in the Marshall Center's Office of Human Capital manages the event, in partnership with the U.S. Space & Rocket Center. Major race sponsors include Lockheed Martin, The Boeing Company, Northrop Grumman Corporation and Jacobs Engineering ESTS Group, all with operations in Huntsville. Other sponsors include ATK Aerospace Systems; the Huntsville operations of Science Applications International Corporation, Teledyne Brown Engineering, Davidson Technologies and the Industrial Fabrication Company; the American Institute of Aeronautics and Astronautics; and the Tennessee Valley chapter of the Systems Safety Society.

For photos of winning teams, links to the race blog and other information, visit: