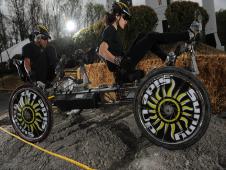 NASA has named its "off-world racing" champions in the 16th annual Great Moonbuggy Race: Rochester Institute of Technology in Rochester, N.Y. won the college division; and Erie High School Team 2 from Erie, Kan., and Huntsville Center for Technology Team 2 from Huntsville, Ala., tied for first place in the high school division.

The three teams bested a field of competitors that included 68 teams from 20 states, Puerto Rico, Canada, Germany, India and Romania.

Rochester Institute and Huntsville Center for Technology were the 2007 college and high school champions, respectively. Erie High School edged out all competitors and won its division in 2008. 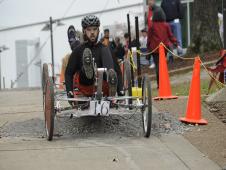 Finishing in the second and third slots this year in the high school division were Arab High School in Arab, Ala., and Huntsville Center for Technology Team 1, respectively. The University of Puerto Rico in Humacao won second place in the college division; and the University of Wyoming in Laramie, Wyo., took home third place despite flipping their buggy late in the winning run.

Race organizers at NASA's Marshall Space Flight Center in Huntsville presented first-place winners in each division with a trophy depicting NASA's original lunar rover. NASA also gave plaques and certificates to every team that came to Huntsville to race.

Individuals on all three winning teams also received commemorative medals and other prizes. For a complete list of additional awards for design, safety, innovation and spirit, see below.


NASA's Great Moonbuggy Race is inspired by the original lunar rover designed by engineers at the Marshall Center. Apollo 15 astronauts David Scott and Jim Irwin piloted the first rover across the moon's surface in July 1971. The moonbuggy continued to chart new lunar territory during the Apollo 16 and Apollo 17 missions.

Today, student racers face design challenges similar to those overcome by Apollo-era rover engineers. Teams build their vehicles from the ground up, typically using bicycle or light motorcycle tires, aluminum or composite-metal struts and parts, and the best drive trains, gears, suspension, steering and braking systems they can find or devise. 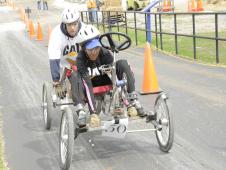 A team from Southern University in Louisiana eyes the finish line of the 2009 Great Moonbuggy Race. Image Credit: NASA/MSFC

That's a key goal of the Great Moonbuggy Race: to inspire students to solve the kinds of problems NASA workers face every day as they seek to continue the nation's exploration of space, benefit life on Earth and gain new understanding of our place in the cosmos.

"This year's race proved once again that offering students a unique challenge, such as building their own moonbuggy, can inspire and engage them -- turning an engineering project into the best fun you can have on wheels," said Tammy Rowan, manager of the Marshall Center's Academic Affairs Office, which organizes the moonbuggy race each year.

"We’re excited that more than a quarter of our participants this year were teams and schools new to the race," Rowan added. "It's great to see more and more young people exploring potential careers in science, technology, engineering and mathematics -- the cornerstones of the nation's economic might."

The first Great Moonbuggy Race in 1994, commemorating the 25th anniversary of the Apollo 11 lunar landing, was open only to college teams. Eight teams participated. Two years later the event was expanded to include high school teams. 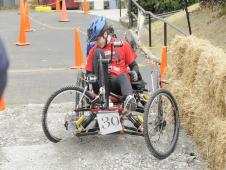 A team from Autauga County Tech. Center in Alabama plows through an obstacle on simulated "lunar terrain." Image Credit: NASA/MSFC

NASA's Great Moonbuggy Race is one of dozens of educational programs and initiatives led by the Marshall Center each year to help attract and inspire America’s next generation of scientists, engineers and explorers -- those who will carry on the nation's mission of exploration, to the moon and onward into the solar system.

For photos of all teams who competed on the course, visit:


For more information about the race, visit: 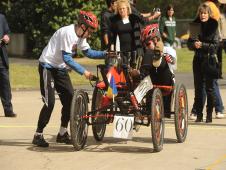 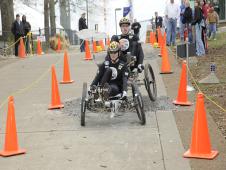 Best Performance by an International Team
NASA Safety Systems Award (for the safest approach to building, testing and racing)
Pits Crew Award for ingenuity and persistence in overcoming problems during the race 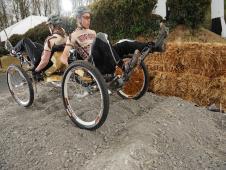 Crash and Burn Award (for the team that endures the most spectacular vehicle breakdown)
Best Team Spirit (for overall team energy, enthusiasm and camaraderie)
Rookie Award (for fastest course completion by a new race team)
Most Improved Award (for the most dramatically improved engineering and performance)