Grow Text SizeShrink Text Size
Liquid Hydrogen--the Fuel of Choice for Space Exploration
Despite criticism and early technical failures, the taming of liquid hydrogen proved to be one of NASA's most significant technical accomplishments. . . . Hydrogen -- a light and extremely powerful rocket propellant -- has the lowest molecular weight of any known substance and burns with extreme intensity (5,500°F). In combination with an oxidizer such as liquid oxygen, liquid hydrogen yields the highest specific impulse, or efficiency in relation to the amount of propellant consumed, of any known rocket propellant. 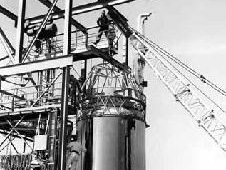 Centaur is raised into the "J" Tower for testing at Point Loma, early 1960s. Credit: Lockheed Martin Because liquid oxygen and liquid hydrogen are both cryogenic -- gases that can be liquefied only at extremely low temperatures -- they pose enormous technical challenges. Liquid hydrogen must be stored at minus 423°F and handled with extreme care. To keep it from evaporating or boiling off, rockets fuelled with liquid hydrogen must be carefully insulated from all sources of heat, such as rocket engine exhaust and air friction during flight through the atmosphere. Once the vehicle reaches space, it must be protected from the radiant heat of the Sun. When liquid hydrogen absorbs heat, it expands rapidly; thus, venting is necessary to prevent the tank from exploding. Metals exposed to the extreme cold of liquid hydrogen become brittle. Moreover, liquid hydrogen can leak through minute pores in welded seams. Solving all these problems required an enormous amount of technical expertise in rocket and aircraft fuels cultivated over a decade by researchers at the National Advisory Committee for Aeronautics (NACA) Lewis Flight Propulsion Laboratory in Cleveland.

The above excerpt is from the Introduction to Taming Liquid Hydrogen: the Centaur Upper Stage Rocket, 1958-2002 →. This report details why the Centaur was so important in NASA history as an upper stage rocket -- the critical link between its booster stage (Atlas or Titan) and the mission's payload (satellite or spacecraft).