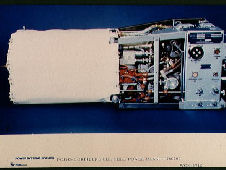 This is one of the three fuel cells that make up the generating system that provides electrical power to the space shuttle orbiter. The unit is a little more than a foot high and weighs approximately 200 pounds. Credit: NASA

The above excerpt was taken from NASA's Human Space Flight web site. http://spaceflight.nasa.gov/shuttle/reference/shutref/orbiter/eps/overview.html