The mirrors are going through receiving and inspection and will then be stored in the Goddard cleanroom until engineers are ready to assemble them onto the telescope's backplane structure that will support them.

Ball Aerospace, Boulder, Colo., under contract to Northrop Grumman, is responsible for the Webb’s optical technology and lightweight mirror system. On September 17, 2012, Ball Aerospace shipped the first two mirrors in custom containers designed specifically for the multiple trips the mirrors made through eight U.S. states while completing their manufacturing. The remaining 16 mirrors will make their way from Ball Aerospace to Goddard over the next 12 months as they await telescope integration in 2015. 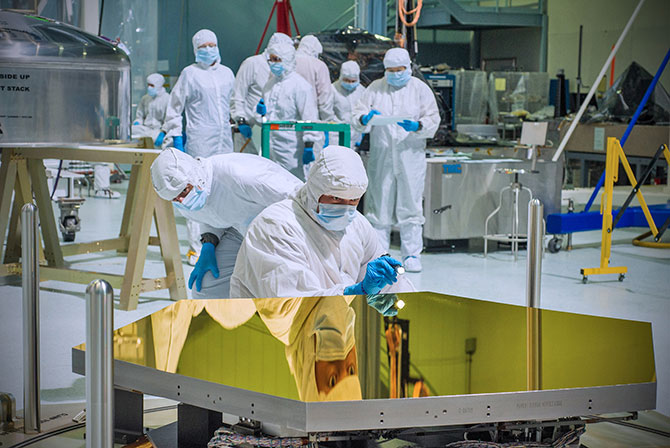 "These first two completed flight mirror assemblies arriving at Goddard are an important first step leading towards the integration of the mirrors onto the flight structure," said Lee Feinberg, NASA Optical Telescope Element Manager for the James Webb Space Telescope at the Goddard Space Flight Center in Greenbelt, Maryland. "These delivered flight mirrors meet their requirements, which is great news for Webb telescope being able to fulfill its scientific potential."

One of the Webb’s science goals is to look back through time to when galaxies were young. To see such far-off and faint objects, Webb needs a large mirror. A telescope’s sensitivity, or how much detail it can see, is directly related to the size of the mirror area that collects light from the objects being observed. A larger area collects more light, just like a larger bucket collects more water in a rain shower than a small one. 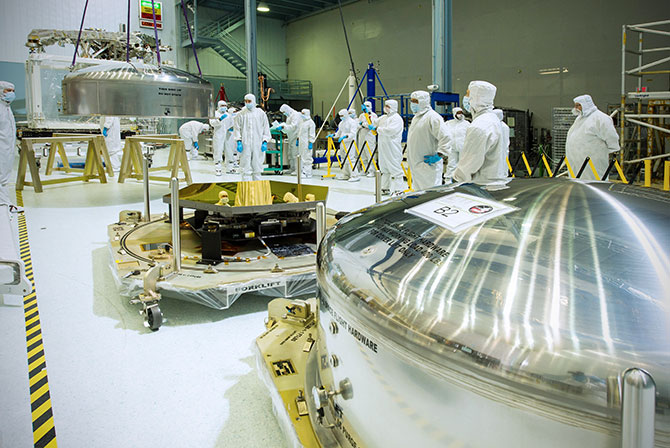 › Larger image
This photo shows one of the two mirrors, while the other awaits opening in its shipping canister. The mirrors have arrived at their new home at NASA, where they will be residing at the giant cleanroom at Goddard for a while as technicians check them out. Credit: NASA/Chris Gunn

Webb’s scientists and engineers determined that a primary mirror 6.5 meters (21 feet 4 inches) across is what was needed to measure the light from these distant galaxies. Each of the 18 hexagonal-shaped mirror assemblies that make up the primary mirror measures more than 1.3 meters (4.2 feet) across, and weighs approximately 40 kilograms, or 88 pounds.

The Webb will be the first space astronomy observatory to use an actively-controlled, segmented mirror. The Webb is critical for future infrared observations. The Webb will be the premier observatory of the next decade. It will study every phase in the history of our universe, ranging from the first luminous glows after the Big Bang, to the formation of stellar systems capable of supporting life on planets like Earth, to the evolution of our own Solar System. It is a joint project of NASA, the European Space Agency and the Canadian Space Agency.