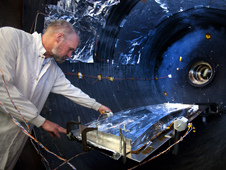 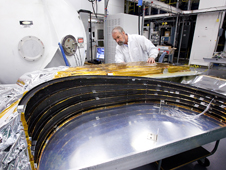 "While adequate venting is a design consideration for all spaceflight hardware, this was a particularly unique challenge for the sunshield given the large volume of trapped air in the membrane system at launch," said Keith Parrish, Webb telescope sunshield manager at NASA's Goddard Space Flight Center in Greenbelt, Md. "From the beginning of its development venting features have been a critical part of the overall sunshield design. Since we cannot vent test the actual flight article these test have shown the design works and the sunshield will vent safely on its way to orbit."

The sunshield on the Webb telescope will block the heat of the Sun and Earth from reaching the cold section of the Observatory. That's a critical function because the telescope and instruments must be cooled below 50 Kelvin (~-369.7 Fahrenheit) to allow them to see faint infrared emissions from astronomical objects. The sunshield consists of five layers of Kapton ®E with aluminum and doped-silicon coatings to reflect the sun's heat back into space.

Using flight-like sunshield membranes, the tests are designed to mimic the rapid change in air pressure the folded sunshield will experience the first minutes of launch. Several different folding configurations each underwent a series of 90-second depressurization tests and proved that the stowed sunshield will retain its shape during launch and allow trapped air to escape safely, both critical to sunshield deployment and performance.

Northrop Grumman Corporation is leading Webb's design and development effort for NASA's Goddard Space Flight Center in Greenbelt, Md. The first tests were conducted the last week of August in vacuum chambers at Northrop Grumman Aerospace Systems' Redondo Beach facility. Another series of complementary tests were completed in October where air was injected into the stowed sunshield test article, and that provided more detailed data used in evaluating analytical models.

"This is another significant risk reduction activity that continues to move sunshield development forward," said Scott Willoughby, Webb Telescope program manager for Northrop Grumman Aerospace Systems. "We have demonstrated the effectiveness of our sunshield vent design."

Three critical full-scale sections of the sunshield were tested: the section on top of the spacecraft around the tower that supports the telescope; the vertical pallet structure that contains the folded sunshield membranes, and the intervening four-bar linkage area that is folded in an inverted V-shape. The flow paths are complex and the sunshield material, a tough plastic film, Kapton ®E, is only one to two thousandths of an inch thick and covers a surface area the size of a tennis court.

The James Webb Space Telescope is the world's next-generation space observatory and successor to the Hubble Space Telescope. The most powerful space telescope ever built, Webb will observe the most distant objects in the universe, provide images of the very first galaxies ever formed and see unexplored planets around distant stars.