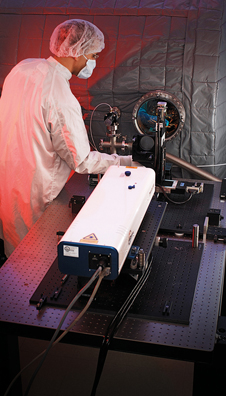 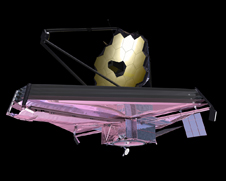 September 2009 artist conception of the James Webb Space Telescope. Credit: NASA
› Larger image A critical component of the James Webb Space Telescope is its new technology. Much of the technology for the Webb had to be conceived, designed and built specifically to enable it to see farther back in time. As with many NASA technological advances, some of the innovations are being used to benefit humankind in many other industries.

The Webb telescope is the world's next-generation space observatory and successor to the Hubble Space Telescope. The most powerful space telescope ever built, the Webb telescope will provide images of the first galaxies ever formed, and explore planets around distant stars. It is a joint project of NASA, the European Space Agency and the Canadian Space Agency.

New technologies developed for NASA's James Webb Space Telescope have already been adapted and applied to commercial applications in various industries including optics, aerospace, astronomy, medical and materials. Some of these technologies can be explored for use and licensed through NASA's Office of the Chief Technologist at NASA's Goddard Space Flight Center, Greenbelt, Md.

The optics industry has been the beneficiary of a new stitching technique that is an improved method for measuring large aspheres. An asphere is a lens whose surface profiles are not portions of a sphere or cylinder. In photography, a lens assembly that includes an aspheric element is often called an aspherical lens. Stitching is a method of combining several measurements of a surface into a single measurement by digitally combining the data as though it has been "stitched" together.

In the aerospace and astronomy industries, the Webb program gave 4D Technology its first commercial contract to develop the PhaseCam Interferometer system, which measures the quality of the Webb telescope's mirror segments in a cryogenic vacuum environment. This is a new way of using interferometers in the aerospace sector.

An interferometer is a device that separates a beam of light into two beams, usually by means of reflection, and then brings the beams together to produce interference, which is used to measure wavelength, index of refraction, and also distances.

Interferometry involves the collection of electromagnetic radiation using two or more collectors separated by some distance to produce a sharper image than each telescope could achieve separately.

The PhaseCam interferometer verified that the surfaces of the Webb telescope's mirror segments were as close to perfect as possible, and that they will remain that way in the cold vacuum of space. To test the Webb mirror segments, they were placed in a "cryovac" environment, where air is removed by a vacuum pump and temperatures are dropped to the extreme cold of deep space that the space craft will experience. A new dynamic interferometric technique with very short exposures that are not smeared by vibration was necessary to perform these measurements to the accuracy required, particularly in the high-vibration environment caused by the vacuum chamber's pumps.

The interferometer resulting from this NASA partnership can be used to evaluate future mirrors that need to be tested in vacuum chambers where vibration is a problem.

New "wavefront" optical measurement devices and techniques were created for making the Webb telescope mirrors. Those have led to spinoffs in the medical industry where precise measurements are critical in eye health, for example.

The optical measuring technology developed for the Webb, called "wavefront sensing" has been applied to the measurement of the human eye and allowed for significant improvements. "The Webb telescope program has enabled a number of improvements in measurement of human eyes, diagnosis of ocular diseases and potentially improved surgery," said Dan Neal, Director of Research and Development Abbott Medical Optics Inc. in Albuquerque, N.M. The Webb improvements have enabled eye doctors to get much more detailed information about the shape and "topography" of the eye in seconds rather than hours.

Webb technologies have opened the door to better measurement in testing the strength of composite materials. Measuring strain in composite materials is the same as measuring how much they change in certain environments. Measuring step heights allows one to understand very small changes in a surface profile and doing all of this at high speed allows the device to work even in the presence of vibration that would normally blur the results.

"Technology developed for the Webb telescope has also helped 4D Technologies, Inc. to develop unique technology to measure strain in composite materials, to measure step heights in precision machined surfaces, and for high speed wavefront detection," said James Millerd, President, 4D Technology Corporation, Tucson, Ariz. Webb telescope technologies have also been beneficial to the economy. The technologies have enabled private sector companies such as 4D to generate significant revenue and create high-skill jobs. Much of 4D's growth from a two man start-up to over 35 people can be traced to projects originally developed for the telescope. 4D has also been able to adapt these technologies for a wide range of applications within the astronomy, aerospace, semiconductor and medical industries.

In the future, other industries may benefit from other Webb telescope technologies.

For more information about NASA's Office of the Chief Technologist, visit:
www.nasa.gov/oct

To access an interactive feature about how NASA impacts your daily life, visit the NASA Home and City website at:
www.nasa.gov/city