The secondary mirror (shown here) was polished at the L3 Integrated Optical Systems - Tinsley in Richmond, Calif. to accuracies of less than one millionth of an inch. That accuracy is important for forming the sharpest images when the mirrors cool to -400°F (-240°C) in the cold of space. The Webb's secondary mirror was recently completed, following polishing and gold-coating. Credit:NASA/Ball Aerospace/Tinsley 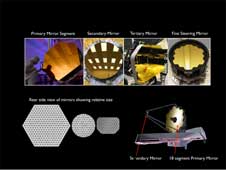 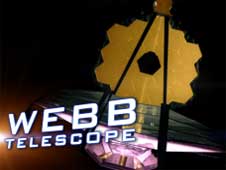 › Click to view video
This 90 second video Movie Trailer for the James Webb Space Telescope, produced at NASA hurls the viewer through space and asks if you can imagine seeing 13 billion years back in time, see the first stars, galaxies evolve and solar systems form. Credit: NASA, Mike McClare
"Secondary" may not sound as important as "primary" but when it comes to the next-generation James Webb Space Telescope a secondary mirror plays a critical role in ensuring the telescope gathers information from the cosmos. The Webb's secondary mirror was recently completed, following polishing and gold-coating.

There are four different types of mirrors that will fly on the James Webb Space Telescope, and all are made of a light metal called beryllium. It is very strong for its weight and holds its shape across a range of temperatures.

Unlike the primary mirror, which is molded into the shape of a hexagon, the secondary mirror is perfectly rounded. The mirror is also convex, so the reflective surface bulges toward a light source. It looks much like a curved mirror that you'll see on the wall near the exit of a parking garage that lets motorists see around a corner. This mirror is coated with a microscopic layer of gold to enable it to efficiently reflect infrared light (which is what the Webb telescope's cameras see). The quality of the secondary mirror surface is so good that the final convex surface at cold temperatures does not deviate from the design by more than a few millionths of a millimeter - or about one ten thousandth the diameter of a human hair.

"As the only convex mirror on the Webb telescope, the secondary mirror has always been recognized to be the hardest of all of the mirrors to polish and test, so we are delighted that its performance meets all specifications," said Lee Feinberg, Webb Optical Telescope manager at NASA's Goddard Space Flight Center in Greenbelt, Md. Convex mirrors are particularly hard to test because light that strikes them diverges away from the mirror. Feinberg noted, "The Webb telescope convex secondary mirror is approximately the size of the Spitzer Space Telescope's primary mirror and is by far the largest convex cryogenic mirror ever built for a NASA program."

The secondary mirror was developed at Ball Aerospace & Technology Corp. of Boulder, Colo. and the mirror recently completed polishing at the L3–IOS-Tinsley facility in Richmond, Calif. Northrop Grumman space Systems is the prime contractor on the Webb telescope program.